I need one help to deploy different components like classes, triggers, objects, profiles, permission sets, etc from sandbox to the production org.

I used following command to deploy all the items on the production. But I noticed that it only validates the changes and is not giving any option to deploy the components

I read different blogs and found that we can use the command "sfdx force:mdapi:deploy" for the deployment. But, I didn't get the exact syntax/procedure or any option in the VS Code which allow deploying all the components on the production.

You should read through the documentation on force:source:deploy again

Validates the deployed metadata and runs all Apex tests, but prevents the deployment from being saved to the org.

Further, when using the -m flag, you're either deploying everything in your project of a particular metadata type (when you use, for example -m ApexClass), or only deploying specific components (when you use -m ApexClass:MyClass, only MyClass is deployed)

Put into words, that command you're currently running says...

deploy the testUtility class (-m ApexClass:testUtility) to myOrgName (-u myOrgName), but only verify the changes (-c). Run all local tests (-l RunLocalTests), and stop listening for updates if the operation takes more than 3 minutes (-w 3)

Using the -p flag to specify a path to deploy to is probably the easiest way to do what you're describing. Using it and pointing to the "force-app" folder would deploy everything in your project unless you've done some serious modification to your project structure.

If you use -c , note that the command will just validate it. 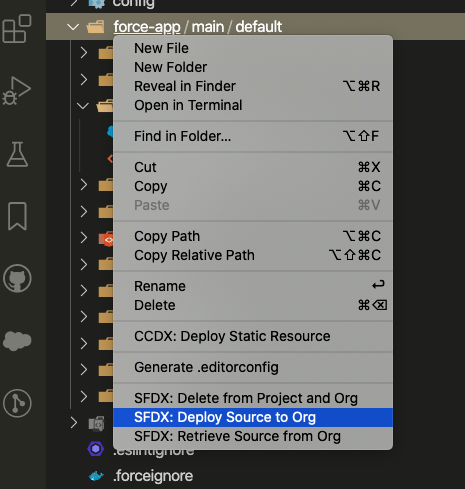 If you are using CLI then you have to add all the metadata and be specific in format as shown below and it will be tedious exercise instead just deploy by clicking on the path.

Note do not put -c there as it will only validate.

Not the answer you're looking for? Browse other questions tagged salesforcedx deployment vs-code mdapi mdapideploy or ask your own question.

2
Production and sandbox profiles during deployment
1
Any good use case for force:source:deploy -o?
1
Trailhead LWC Basics - ERROR running force:source:deploy: Deploy failed. - E_Bikes1 Not Available to Deploy for this Org
1
Production Deployment of CustomLabel using VS Code (INVALID_ID_FIELD: Source validate did not run tests in the org)
1
I am getting this error: ERROR running force:source:deploy: The Flow named ListingID_Update was not found in the workspace
3
Issue with Prod deployment from VS Code sfdx CLI
1
Why does my SFDX deployment validation fail while a change set with the same components and specified tests passes?