Why does my SFDX deployment validation fail while a change set with the same components and specified tests passes?

I needed to validate that the deployment of some components would succeed. The deployment would be between two sandboxes of the same production org.

The components were two class/test class pairs that were already in the destination sandbox (i.e. only changes to the existing code were intended for deployment):

I wanted to use SFDX to validate. The first step I completed was to convert the items above from source to metadata format (although now it looks like there's no difference for classes).

I ran this command:

That created these files: 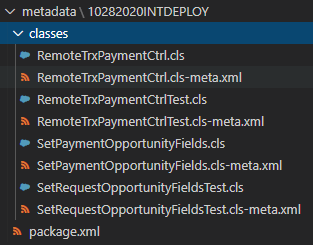 Then I finally ran this command to perform the validation:

But the validation Failed:

So I wanted to compare that SFDX validation attempt with a change-set validation.

I created a change set with the same components:

And that validation succeeded: 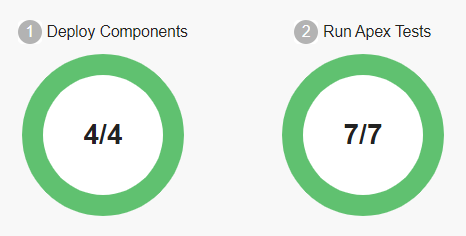 So why the difference?

Because your changeset is different from what you prepared via SFDX.

That there is your entire issue.

You don't need to do the conversion to metadata api form, as force:source:deploy has been able to deploy to sandboxes (and production) for several releases. The following should do what you want

the -m flag tells sfdx to only use the specified metadata in the deploy operation. Comma-separated list in <Metadata Type>:<API name> format.

Not the answer you're looking for? Browse other questions tagged salesforcedx deployment salesforcedx-cli change-set mdapideploy or ask your own question.

10
Accidentally created wrong directory then pushed, deleted directory now can't push
0
Error on starting Salesforce DX project
2
Not seeing changes to LWC after deploying via VSCode
4
Issue with Prod deployment from VS Code sfdx CLI
0
Unable to insert custom metadata records with cmdt command
4
Does change set validation run tests within the change set class or the class already in the org or a merged version of both classes?
1
validate multiple directories in one deployment with the Salesforce CLI
2
Salesforce CI CD deployment commands
0
Gitlab pipeline: What sfdx command can I execute to do the same that Quickdeploy does in Salesforce Deployment Status Setup page?