I have Email Notification functionality but finding some difficulties in it.

My Requirement : I have custom field(look up datatype) called Assign_To__c which is look up to User object(standard salesforce user object). Whenever record is submitted with assign_to__c field is not equal to null, it should send an email notification to that user as well as his higher officer.

for example : see the role hierarchy below 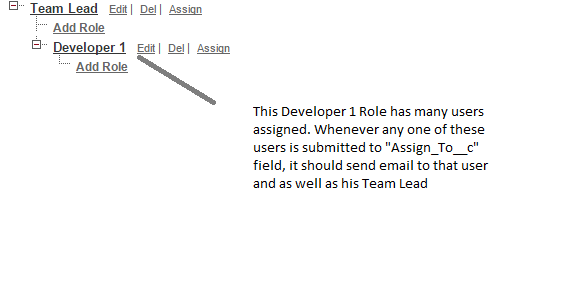 Whenever Developer 1 is assigned then it should send email alert to developer1 and his Team Lead. This is the way I want to do. I think Workflow will work here. But I don't know the exact way to accomplish this(Don't know Which fields to use).

The problem is that there could be more than one user assigned the role "Team Lead". But what you probably want is the specific Team Lead for a specific Developer. (Your role hierarchy seems a little wrong, since you probably only need one role to represent developers)

Every User has a .Manager, so I'd use that to fire an email.

You will have to ensure that every User has a manager assigned.

If your role hierarchy is reasonably small, you could create a public group for each of the senior roles for a given junior role.

Then, you would evaluate the users role, and have a separate workflow for each role that sends an email alert to the appropriate public group.

Thus wouldn't scale to a large complex hierarchy, in which case code is prob best way to go.

Not the answer you're looking for? Browse other questions tagged email workflow role-hierarchy or ask your own question.