Below is the screenshot of salesforce customer communities from one of videos of salesforce ( http://www.salesforce.com/chatter/features/communities.jsp ).Can someone help me in customizing the look and feel of chatter part.How to built the entire chatter functionality like the one shown below 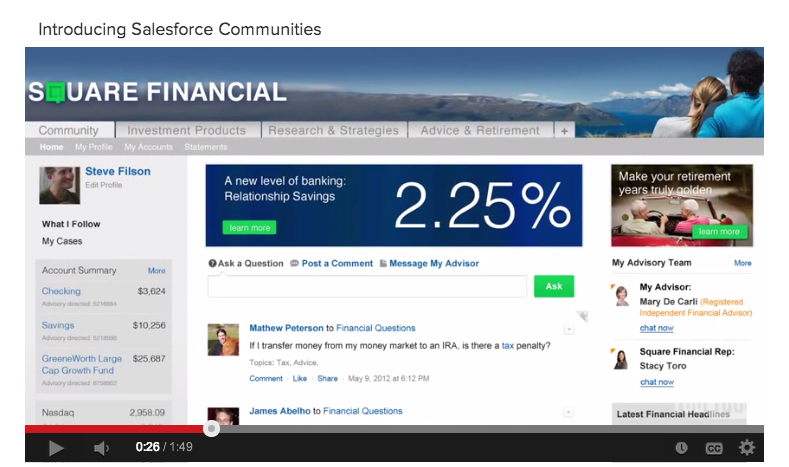 From my experience, some of the marketing material put out around products like Communities and Site.com can be very liberal on what is "possible" on a public facing site. In this scenario, I believe you would need to custom code the entire Chatter feed to get that exact look and feel. You can achieve that using custom CSS/Javascript and the ConnectApi. I have done some work in the past (Chatter Image Gallery & Extended) with the ConnectApi Namespace and it isn't too bad to use if you want to go that route.

However, with that said, you can probably avoid all of that and just use the correct Visualforce Chatter tag. The only real difference between the standard Chatter feed and what you have in your screenshot above is the button. The Chatter button says Share, not Ask. In this scenario, I would use the <chatter:feed> tag:

Displays the Chatter EntityFeed for a record or an UserProfileFeed for a user. Note that Chatter components are unavailable for Visualforce pages on Force.com sites. Ext JS versions less than 3 should not be included on pages that use this component.

Note: In the past, I have seen Salesforce Communities used in conjunction with Force.com Sites to provide a public facing and authenticated facing site. In this scenario, this tag will not work on a Force.com Sites page.

For adding the other functionality (Message My Advisor for instance), look into Publisher Actions.

The publisher actions feature lets you create actions and add them to the Chatter publisher on the home page, on the Chatter tab, in Chatter groups, and on record detail pages. You can also customize the order in which the standard Chatter actions appear, including Post, File, Link, and Poll.

Actions let users do more in Chatter, like create records and log calls directly in the feed. There are four general types of actions: create actions, log-a-call actions, update actions, and custom actions.

Note: You may find the Publisher Actions Implementation Guide useful.

Not the answer you're looking for? Browse other questions tagged chatter community or ask your own question.