Test Coverage for ENUM, Properties - Differences with default value, no values, and getters/setters

Maybe I am remembering wrong but I think things have changed and I missed the document. Back to basics with this question

For a class that has no methods and is just ENUMS:

Salesforce says there are 0 lines to cover (in fact it never even appears in list of classes that can be covered) and during tests nothing is ever covered despite the enums being used.

Another example without enums:

So my questions in the context of just instantiating the class):

In the other class it counts as 1 of 2 lines covered. The first property is not counted nor covered. The one with the getter / setter is counted and not covered.

I believe it is important to understand this as it really impacts the access the developer gives code. Many are used to just adding getters / setters even if they are not needed. In the above that decision creates unnecessary coverage requirements.

Enums, interfaces, abstract methods, class-level declaration statements, class definitions, and debug statements never count for code coverage. Everything else does, including getters and setters, non-abstract methods (including the method signature), class-level assignments, and every non-debug line of code within a method always count for coverage.

Has this always been the case?

Yes, it's been this way since the inception of Apex, as far as I can remember.

Yes, it is a "class-level declaration statement," and thus has no coverage.

The first property is not counted nor covered.

It is a class-level declaration statement, and thus has no coverage, either.

The one with the getter / setter is counted and not covered.

This transforms the line from a class-level declaration statement to a method signature statement, thus requiring coverage.

It seems if a property is defaulted to a value it counts as a line of code to cover and gets covered.

Yes, any time you use the = operator, it is no longer just a declaration, it is an executable statement; you're assigning a value to a variable.

Yes, there are plenty of ways to make more work for oneself, and one of them is to unnecessarily declare default getters and setters. They are strictly only necessary for Visualforce attributes, and should not be used otherwise without a reason.

I think more to the point, it is up to each developer to learn all of the particular tools in which they use (in this case, the various parts of the Apex language) to write the most optimal code possible. Unfortunately, we have a lot of poorly written resources out there that newer developers prefer to read than to check the official documentation, which further perpetuates the cycle.

This problem is further exacerbated by the fact that the documentation team, despite doing a pretty good job at what they do, presume that the readers have a decent history in Java, C#, or another related language. The "obvious parts", like why { get; set; } causes code coverage, isn't in the documentation. It's presumed that the reader knows that these are really methods, and all methods require code coverage.

Regarding (2), though, the rather terse summary from Salesforce is simply this:

Declarations of variables, classes, enums, and interfaces are considered not to be executable as such.

However, both static initialization code and instance initialization statements are executable, as are getter and setting methods, even when synthesized by the compiler. (I agree that in the case of synthesized getters and setters this makes no sense).

Here's another example illustrating this:

Starting out, we obtain no coverage at all, but note that Salesforce considers all of the initialization code (static and instance) coverable, as well as the property declarations. None of it has been executed. 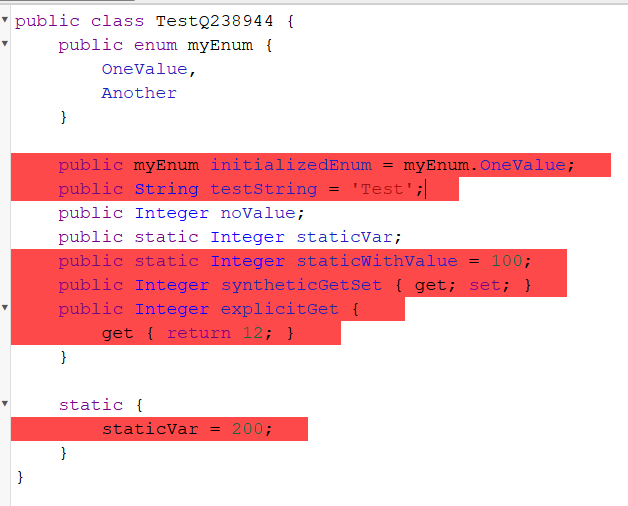 Should we touch some static property of the class, we can cause all of the static initialization code to run: 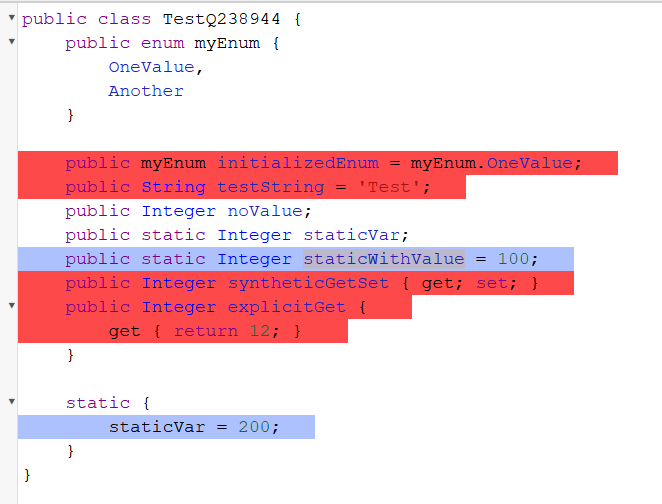 As a further note on the executable nature of these lines, we can establish that they're in fact executed in a specific order: inline statics are run first, and static initializer blocks are run second. Changing the declarations like this

results in a NullPointerException, but

Next, running the following test class to actually create an instance:

results in this coverage: 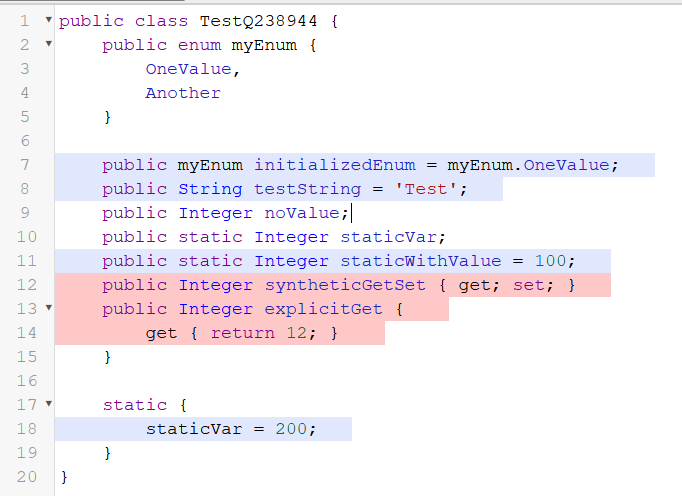 Note that the static initialization code and the instance variable initializers are shown as covered.