Workflow rule not working with change of Contact.Owner?

I approached problem which obviously is not solvable by a trigger. I need to update Contacts's field on change on it's owner's field. Not accomplishable in trigger because MIXED_DML_EXCEPTION. Workaround it use future handle, however I have another future handler on Contact, so dead end this way. That's why I need to use workflow rule.

Intuitively, this makes perfect sense. Workflow rules for Object X are triggered when there is a change on Object X. You're updating a field on User, not Contact. Therefore, workflow rules are not evaluated on Contact because you aren't changing a Contact, you're changing a User.

If you don't need the Contacts owned by a User to be updated immediately, then you might try creating a Schedulable class, and having it run on a schedule The documentation on the Apex Scheduler will help with that.

If you do need Contacts to be updated immediately, and you're absolutely certain that updating Contacts from a User trigger causes the mixed DML error, then you really don't have much choice besides going async.

You don't need to use an @future method. Implementing the Queueable interface (the documentation on Queueable Apex will be helpful there) is one way to work around that issue.

You must try this 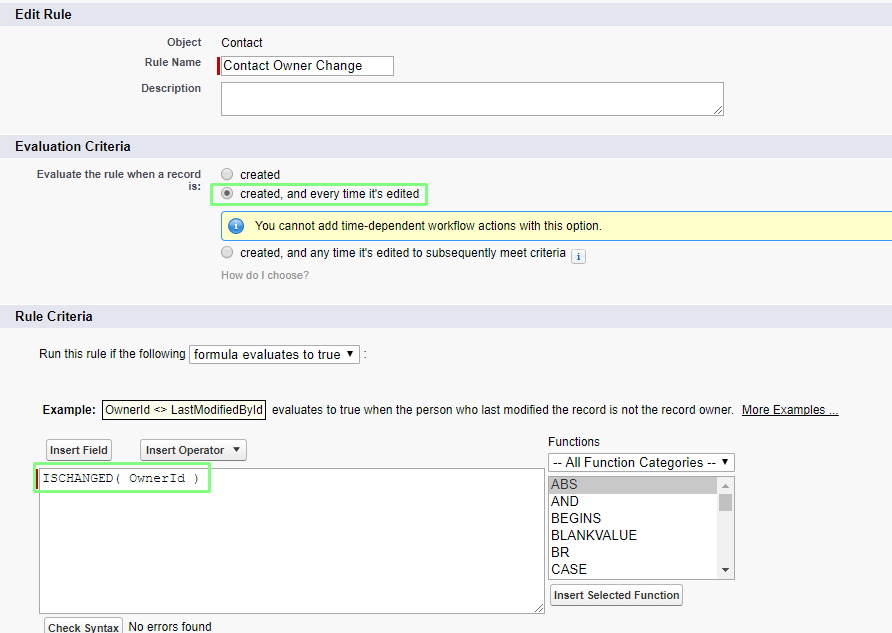 You must check whether the owner is changed and then add field updated.

Not the answer you're looking for? Browse other questions tagged workflowrule or ask your own question.

3
Send email to user when activated, using workflow rule
2
Field Update in Workflow Rule
7
Struggle to understand reevaluation of workflow rules
1
Time based Workflow in combination with recipient change
0
Workflow Rule not working and unable to auto launch a flow
0
Can a process builder trigger a workflow field update?
1
Help with Workflow Rule
1
Does “Re-evaluate Workflow Rules after Field Change” behave more like a Boolean or a Set-ID for recursion prevention?