Showing a loading Spinner for my component but not during Init

So I am trying to implement a Spinner whenever my component is doing something server side. It is working just fine EXCEPT:

I have this in my component:

And the spinner appears and disappears like 10 times load which is NOT ideal.

Note: I have seen this : Lightning Components executing logic on init state only and attempted to implement and it did reduce the calls to the spinner toggle from like 20-30 down to < 10. But more than once is too much during init.

Here is an example. Simply place in the contact standard page layout as look at the console and see how many times it gets called (over 10) 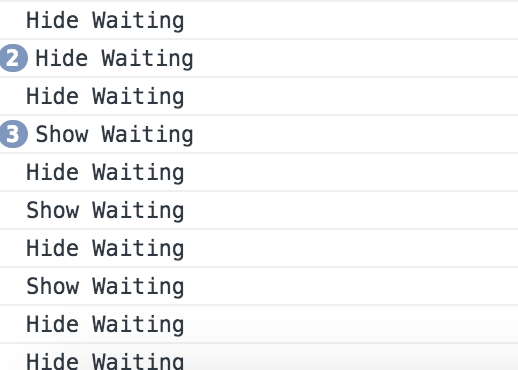 The aura:waiting and aura:doneWaiting events are fired at the start/end of every Aura action, even ones you don't fire yourself. Unless your component is running in complete isolation (standalone Aura app outside of the Lightning platform), this is probably not what you want. Even if you manage to ignore the events during your components init, the container app may fire server-side actions in the background and trigger your event handlers.

Manually toggling the spinner is probably your best bet. There are multiple ways to reduce code duplication rather than copy/pasting the same helper method everywhere. One way is to create your own custom event to toggle the spinner. Then you just have to make sure you fire the toggle event at the correct places and the code to show/hide the spinner can be consolidated to one spot. Another option is to use component inheritance like @RedDevil suggested in the comments.

So here is how I currently see it and I may be wrong so please feel free to add an answer with a different take:

If your Spinner is in a main component and you want to show / hide it from any component in the application you would do the following:

If your Spinner is in a component and you want to show / hide it locally (can be combined with above to have multiple spinners):

So which way you choose it depends on how, where, and when you want to show / hide the spinner.

I did this in my code and a simpler way to invoke spinner instead of using Aura:waiting and Aura:doneWaiting tags.

When you have multiple components on a lightning page and if you use Aura:doneWaiting , i found that it will invoke multiple server side calls. the below note was mentioned here

We don't recommend using the legacy aura:doneWaiting event except as a last resort. The aura:doneWaiting application event is fired for every server response, even for responses from other components in your app. Unless your component is running in complete isolation in a standalone app and not included in Lightning Experience or Salesforce1, you probably don’t want to handle this application event. The container app may fire server-side actions and trigger your event handler multiple times.

I tried this and it worked for me.