Lookup Relationship: One to Many where Child can belong to Multiple Parent

I wish to have a Gym object that contain zero or more members as a related list. So Gym is the master and Member is the detail side - but the Member records does NOT have to be linked to any particular Gym.

Basically, when I create (or edit) a Gym record, I want to be able to attach 0 or more Member records to that Gym record.

In the related list page block - I do NOT want the New button to create a NEW Member record - instead, I wish to do a lookup of Member records and to attach as many of these as I require for the master Gym record (not just a single lookup - as per the Account lookup when I create a Contact lookup)

What is a good way to implement this ?

To capture this in Salesforce, you'll need 3 objects. You already have 2 objects, Gym__c and Member__c. The third object sounds like it'll be Membership__c.

This concept is called a junction table, though in Salesforce it's known as a Junction Object. Membership__c would have a relationship to both Gym__c and Member__c.

If you continue on reading through that documentation link, it goes on to say that you could include fields from Member__c in the related list on Gym__c (and vice versa), even though the related list is to Membership__c. You might only be able to do this if you make Master-Detail relationships though (I'm not able to test this out myself at the moment).

Adding multiple members to a gym sounds like a separate question to me. This question may be a good place to start

Seems you are talking about Junction object. Where you can define many to many relationship.

I would suggest you to create object Called "Gym Member" and make Gym object and Member object to its child. Please see below picture which shows many to many relationship. 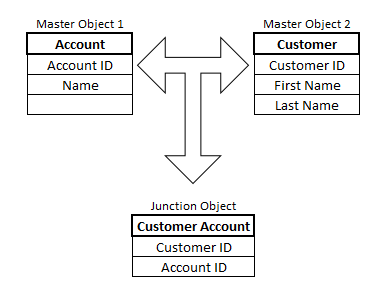 Not the answer you're looking for? Browse other questions tagged lookup relationships or ask your own question.

2
Can Many to Many relationship be achieved using lookup relationship?
6
Circular Lookup Reference
2
Having Trouble with Parent-to-Child lookup/SOQL Query
0
insert a related list from a indirect relationship
2
One lookup field for Multiple Objects
0
Can we use formula fields in lookup filters or how do I implement lookup filter to match `D.A` to be equal to `C.B.A`?
0
LookUp selected record not showing in related List
0
Many Lookup Relationship for One Object