@Future at risk for race conditions?

If I invoke an @future method from a trigger that is performing a calculation based on data that is being committed in the trigger am I at a risk for a race condition?

We're implementing a complex rollup calculation that we'd like to be real time (or near real-time). Specifically we're rolling up the latest activity date for tasks across and account hierarchy segmenting by the type of account. We can't use the standard LastActivityDate field since we need to exclude some auto-generated tasks. To calculate this date is a pretty intensive query so we don't want to hold up the task commit while the calculation takes place. However, if the rollup calculation occurs before the trigger fully commits the data will be incorrect. Is this a realistic concern?

The safe bet would be to take whatever @superfell's puts forward as being a more authoritative answer.

That said, I did come across the another question that showed signs of being a trigger race condition in the askers described symptoms. Future Method is not updating value of a field

This may not be how it actually works, but the user fired 3 separate future methods one after the other in the same transaction. Each future method did the same thing. Retrieve a single record, increment a counter, update the record with the new value. When run in parallel this would be a text book race condition.

I had a look in the Asynchronous Processing in Force.com doc to see if I could find any clues about how the future methods ran.

This diagram from page 3 showed the future method requests being passed out to various worker threads on different Application Servers in parallel. 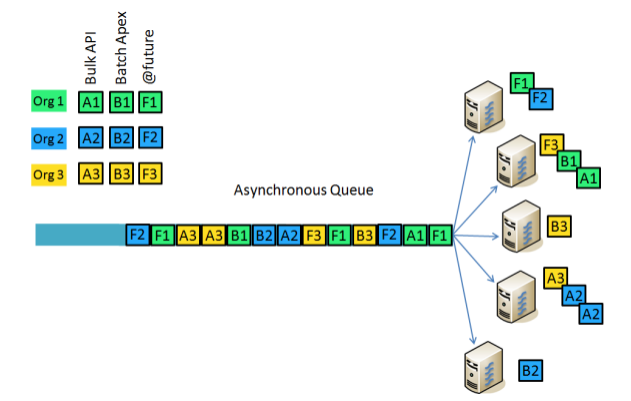 The diagram may be an oversimplification, but it certainly looks like the future jobs could run in parallel in different threads.

Not the answer you're looking for? Browse other questions tagged apex future or ask your own question.

0
Identify all accounts with no activity for 60 days excluding emails send through mass email
8
Can a DML retry solve UNABLE_TO_LOCK_ROW race conditions?
5
Solving Race conditions with ActionFunctions
0
Future Call out execution order for same object
15
Future Method calling Another Future Method
1
How to get Sum of all Order Amounts for an Account?
2
How do I avoid race conditions when importing a large batch and running future methods?
0
What is the query limit for @future method