I have been using MavensMate with Sublime Text by myself with one salesforce sandbox org. I store my code in Bitbucket.

Now I will be working in two different orgs and will add multiple developers. Eventually we will be merging into one org but for now they are separate organizations.

There does not seem to be a way to close one project and open another so I am confused on how to work on two separate projects in two separate repositories.

Additional Info: I have gotten the answer I need for question 1, thank you for all the replies.

My mm workspace is "SF org repo" When I created the MavensMate project for project B, it was moved into this workspace and deleted from "New org repo".

What I think I need is to have 2 different mm workspaces but I do not see a way in the "create mavensmate project" to select a different one.

Leveraging a tool like CumulusCI may significantly help your development process.

This is great question.

Here is how we can set them

If you have tools like CumulusCI or CircleCI life is easy to set up automation.

You can create multiple projects in mavensmate and should not be any difficulty. It will open in separate windows.

Creating a new project and having multiple git repos is a pretty straight forward task in terms of MavensMate, SublimeText, SourceTree (assuming you use a git ui for commits), etc. It doesn't sound like you are doing continuous integration or any actual building on the repo side, so this should be pretty easy for you and anyone else to adapt to, especially given you have experience using the tools already.

At this point i would assume you already know how to take a full retrieve of an org and move it into a repo in source control (using the ant migration tool as noted). From here, i actually like to switch over to SourceTree to manage my git stuff before i create my project in MavensMate. So as noted earlier with Dev1 and Dev2, I would actually create those two folders under SalesforceSource using SourceTree and let it handle bringing down all the git stuff with it. What i end up with after pulling down Dev1 and Dev2 from different repos are two different folders of Salesforce Metadata that i can actually convert into different MavensMate projects and connect them directly to their respective orgs using the MavensMate UI. You can do this super easily by simply opening those cloned folders from SourceTree into SublimeText, and then create a MavensMate project by right clicking on the root of that folder structure and creating a new MavensMate project from them.

In Sublime, go to File>New Window 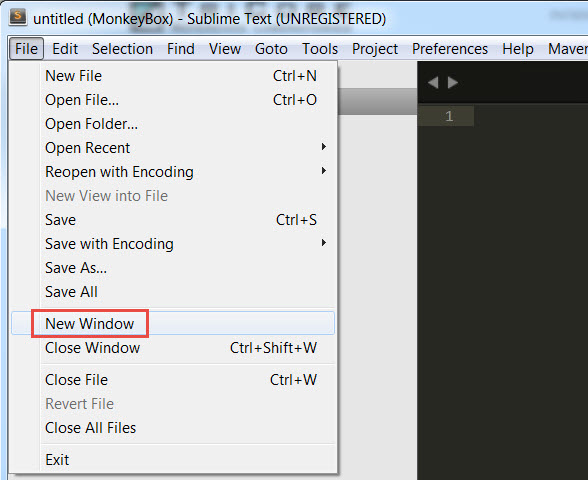 In the new window, go to File>Open Folder

Open whatever folder is the clone of your repo. Mine here is MonkeyBox. (note I'm only showing SourceTree here so you can see how that clone should be setup. You don't actually have to go to SourceTree in this step) 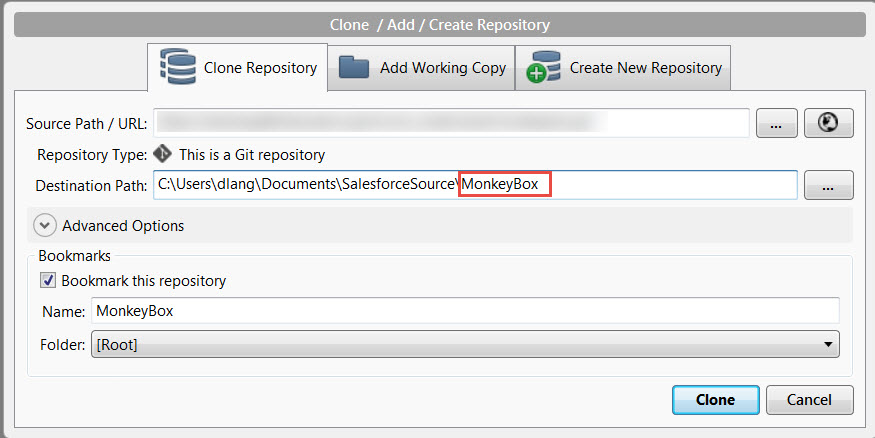 As far as your questions are concerned, keep sublime settings out of source control. There is no need to store people's personal configurations server side, especially when sharing code with other devs. Leave those local, and i would add them to the gitignore to make sure they dont come across accidentally or you may end up pointing someones project to the wrong default workspace or something of the sort.

When working with other developers, you typically DONT commit against master all the time. A lot of devs i know are used to just committing to master but i think this is bad practice for multidev environments. If you are using git for a fancy backup solution, its fine, but working with multiple devs you can step on each other's toes super fast always overwriting master. A typical CI development cycle would have developers check out master, create a branch for the ticket or change they are doing, do the change and submit a pull request for it to be merged with master, merge into master upon approval, and then repeat the cycle. So in simple terms, create branches for every change you are going to make as a dev AFTER you pull anything else other people have done from master.

Feel free to ask if you have any specific questions. I think i have a general dev cycle with git flow i may be able to find on my other pc, and i have a training video i give to my devs that literally covers this entire process step by step, with example changes being made in a dev org and pushed into a single sourced controlled org.