I'm creating a visual workflow & login flow so that my users see a release notification before each deployment. I only want them to see the notification once, instead of every time they log in, which is where I'm running into a roadblock.

I created a custom checkbox on user called "Release Notification Seen?" and only want the release notification to be show to the user if it's unchecked (or FALSE).

The thing that's happening is that my users are always logged in without seeing the notification, regardless of the value in the release notification field.

Any ideas why my flow isn't correctly recognizing that the release notification field is un-checked? 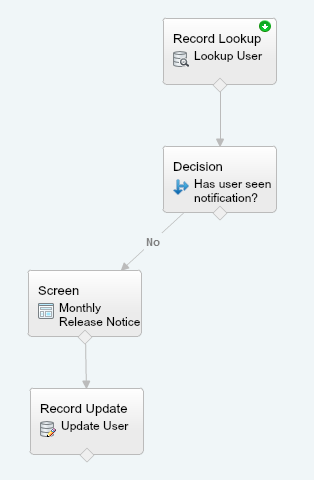 Here are a few images that show the contents of the flow: 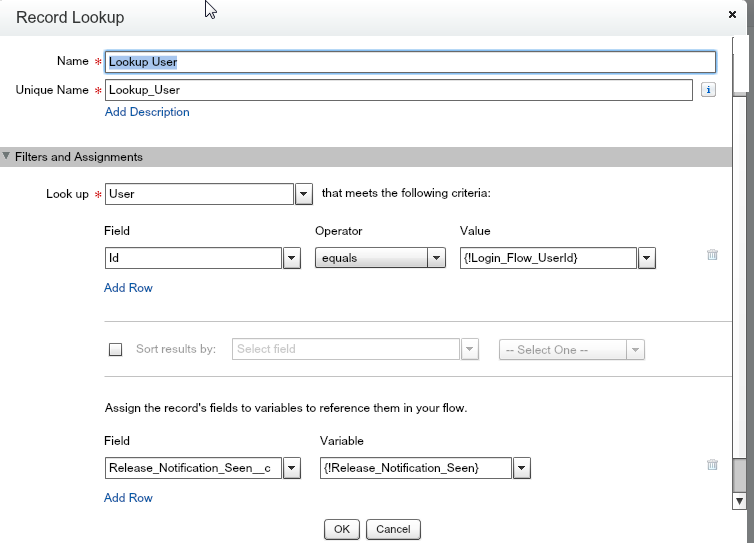 This image shows the decision contents 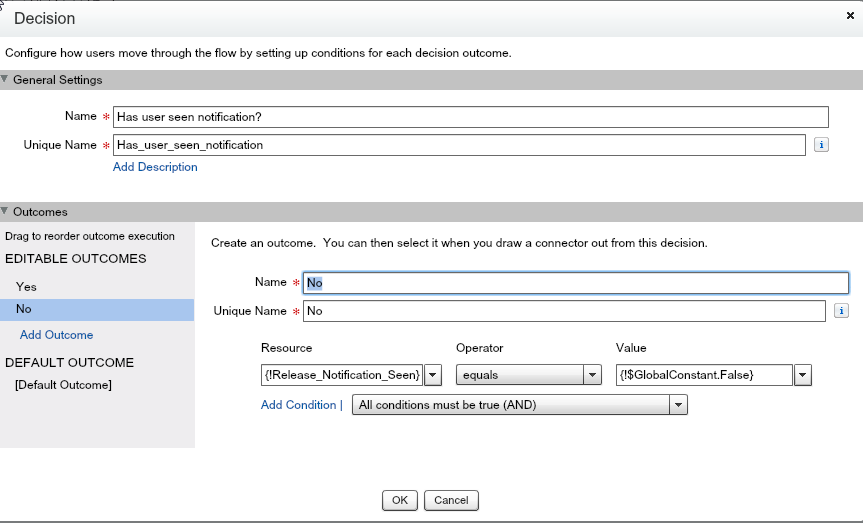 You named your Flow input variable wrong to get the Flow User ID. The proper format for that input variable should be LoginFlow_UserId as noted in this support article. It's not working because you aren't actually passing that users ID to the Flow, so it will never return the values you want from the User record.

Change the name of your variable to LoginFlow_UserId and everything should work just fine.

Make sure to assign the value of "Release Notification Seen?" to a variable. Use the variable in your Decision step. Alternatively you can have a "Assignment" step between Record lookup and Decision.

So, I agree with SL man and say that you might not be doing something right with your assignment of the variable and use in the decision... however, I am going to go off on a limb and say that is not whats going on.

I believe the issue you might be having is that you hid this field from the users? Flow runs from the User's perspective. They'll need Read/Write on this field for you to do this. You'll need to hide it from the Page Layout because of that (unless that isn't a big deal to you). But, because its not triggered by Process Builder, it isn't run in the SYSTEM perspective and its based on that individual Profile's Field Level Security

Not the answer you're looking for? Browse other questions tagged visual-workflow flow loginflow or ask your own question.

2
Issue with checkbox initialization in Visual Workflow
0
Login Flow - Show notification and then force logout
1
Login Flows: skip some users and page customisation
0
How to validate data using a Flow Screen with ease?
1
Flow - Dynamically Populate Display Text
14
Can a Login Flow know which Connected App started it?
0
How to display/edit records using the flow builder?