How can I tell what is changing in Salesforce as they patch each pod?

In another question where EU2 was behaving differently to EU5 I commented:

Which left me wondering, How can we tell what is changing with each patch release?

Where is the documentation for the contents of each intermediate patch release?

@TimChadwick helpfully pointed me to https://success.salesforce.com/issues_releases_view?release=190000000, which shows the list of main pods and their current patch status. 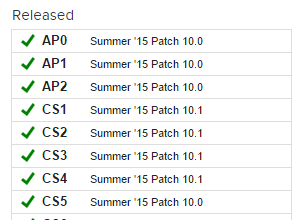 What I found more interesting was the release=190000000 in the query string.

From the Scheduled and Fixed known issue pages I found the following samples:

This certainly seems useful, but applying it to the Summer'15 Patch 9.6, which I know existed as I noted it in the question, didn't reveal any known issues.

Also, not everything that is being patched appears as a known issue. Is there any other source of changes in the patches?

There is a "current patch" view on the Known Issues site. Arguably this is the most important single piece of information, i.e. the stuff that is about to be fixed.

And you have inferred the correct structure of the query param. You can even see this if you use the following:

You will see the current release. But the following indicates release in progress (as of the time of this post).

Clearly the release team is trying to communicate the information you want, it just isn't very clear how to get to that information in some instances, and how it works (what is the numeric code that corresponds to a release, what are the patch numbers, when were they released, why is history incomplete, etc.)

I would suggest that this should be an idea on IdeaExchange, to the effect of, "Greater transparency and clarity in patch releases with regards to affected features, services, instances, and history."

I know that "have you tried IdeaExchange?" can start to be a pat answer from a Salesforce employee (like me), but I truly believe that this is precisely the kind of feedback that the technology teams should be getting from customers and implementers. You can also use it to suggest the level of documentation needed.

In fact, there is already an idea that is asking just that, 2 years old, with a measely 3 votes. If everyone who up voted for this question had voted instead, it would have increased the point count by times.

Some specific comments to clarify how what has been done already could be improved might also be good.

Please vote for Easy navigation/searching for Scheduled/Fixed issues by release.

Update: Current idea point count as of Dec 2017 is at 390. If you up-voted the question above (or for this answer), then please vote for the idea!

The next popular scheme is “Release Maintenance” that is used to upgrade the Salesforce services and release advanced versions with enhanced features and functionalities. The release maintenance category is further divided into three different kinds – Major releases, patch releases, and the Daily releases. All of them had their own meaning and significance.

Major Releases–This type of releases is usually posted after one year by the Company. They are well documented and it is easy to find out the major features enhancements and how they are beneficial for the users. The release date is also announced in advance with a release note that gives the snapshot of all major changes. The Help module and training materials are also prepared in advance to help the users in the best way.

Patch Releases – The next popular category is patch releases that is used to maintain scheduled releases almost every week even two-three times a week. Patch releases are usually announced at the peak hours of the weekdays and they are given in the format as shown below –

In the same way, winter patch releases are also announced with the version numbers mentioned at the end. The best part is that patch releases make sure that platform is progressing continuously as per latest technology trends while this is hard for the users to identify what is included inside every patch release and how it can be beneficial.

With the easy navigation options and tagging facility, more transparency has been added to the patches, still there is a requirement of proper documentation along with each patch release to make the things simpler for the users.

Daily Releases – The last category is daily releases that are scheduled on the day-to-day basis and gives assurance that issues are fixed on fixed time frames.

However, notifications for the different type of releases are sent in advance to the system administrator to make the quick action as needed for your organization.

Not the answer you're looking for? Browse other questions tagged release patch instance or ask your own question.

5
Trigger in Managed Package in error state, can't be cleared
13
Install Managed Package Into Sandbox Fails on All Lightning Component Bundles
2
What is the Salesforce version naming and numbering schema?
5
EU5 not usable for development: Metadata-API deployment on EU5 unresponsive
8
6 minute delay in a Visualforce response in Spring ‘20 Sandbox Preview orgs
4
When did PicklistEntry label become null?
3
Is there a Patch release schedule? Can I request my org be upgraded to the latest Patch?
1
Something updated over the weekend and now my visualforce page isn't working as expected