I have this beforeUpdate trigger on Lead, which is calls a static method to populate 3 different fields based on data passed to a Picklist field.

How the logic is supposed to work is:

Note: There is also a field called Primary_campus__c which gets populated in a similar manner during the beforeInsert cycle

No matter whatever I try, the test fails at the 2nd System.assert() onwards and highlights the 3 conditional blocks in the method as not covered. 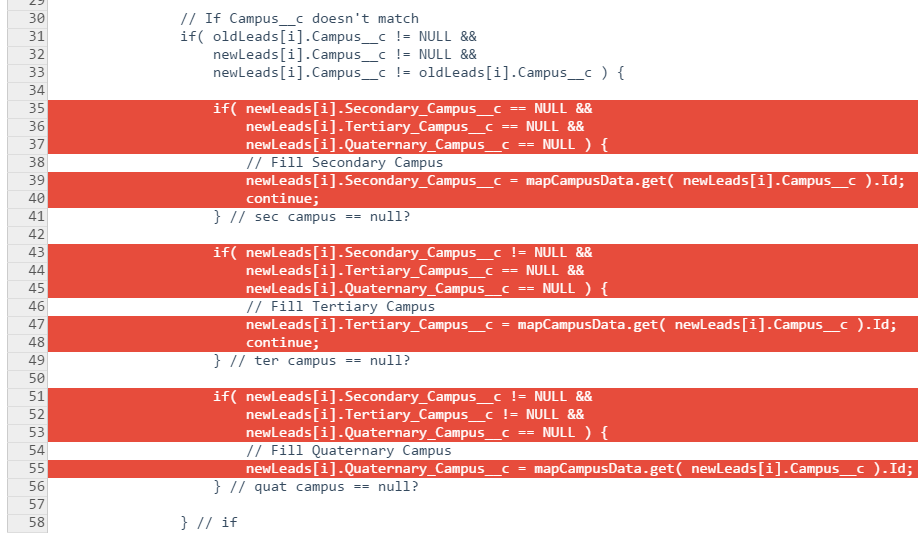 Can anyone please point out why the test keeps failing?

This was too much to put in a comment. In your test code here, where your problems begin:

It would seem that your query and asserts should look like:

Edit in response to comments:

I'm not certain what mapCampusData is, but it doesn't appear to be assigning the old value of Campus__c to Secondary_Campus__c for the lead as something like the below would, assuming oldLeadsmap is the equivalent of trigger.Oldmap.

Not the answer you're looking for? Browse other questions tagged apex trigger leads failing-tests before-trigger or ask your own question.

1
Apex Test not updating parent object field based on child object formula fields
5
Unit Test is Providing 0% Coverage for Apex Trigger
1
"Required fields are missing: [ProfileId]: [ProfileId]" when running Apex Class Test for ChatterAnswersAuthProviderRegTest
1
Code Coverage to Test Custom Object Public List
1
Help! After Trigger Not Updating a field
2
How do you assert a test method for apex validation
0
how Can I remove query in for loop And want to avoid for loop with in for loop