There's a checkbox in Setup -> User Interface that allows you to drag Accounts from list views to calendar & quickly create events. When you drag them, a "balloon" pops up with all the fields (mini page layout).

It's all nice and shiny when Event has no record types: 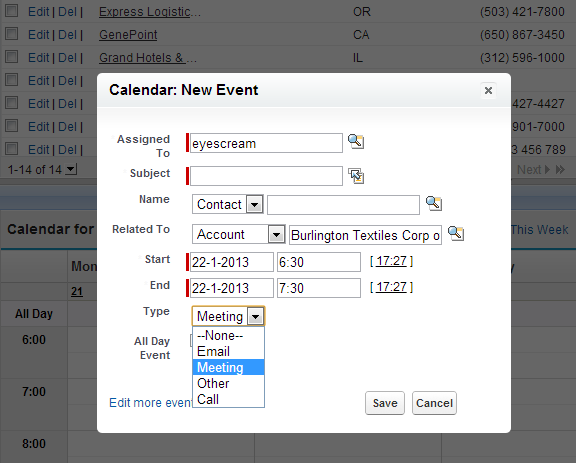 But as soon as you add record types picklists get empty. 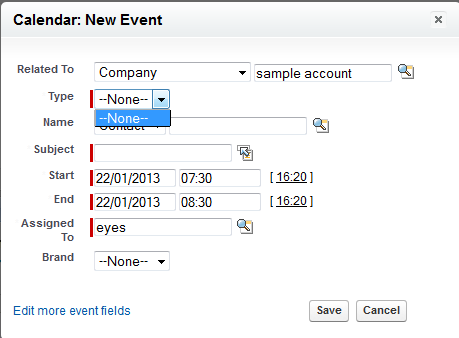 No matter what I do - picklists always come out empty.

As you can see we want Type to be mandatory but effectively this cripples whole feature - blank value prevents saving so you have to go to "Edit more fields" (a.k.a. normal edit page).

Did I forget to check something? or maybe there are better calendar-like solutions I could use? I'm even keen to hack the JavaScript & display my VF balloon or something - I'm just wondering if anybody stumbled upon something so simple before...

Confirmed this with SFDC, it's a bug on their end, and no ETA on a fix.

I've taken a look at the details of this issue, have done some further testing to confirm that this issue does look related to the Spring '13 release, and have confirmed that there are no existing bugs that have been logged that would cover/explain this behavior.

NEXT STEPS: I'm sending this up to R&D now, with the details of the orgs that I have used to reproduce this issue, and will work with them to get a new bug logged. I'll be in touch as soon as I have another update from them.

Thanks for your continued patience.

Not the answer you're looking for? Browse other questions tagged list-view activities api-27 calendar or ask your own question.