Saw this as I was installing eclipse earlier. Anyone know how to tinker around with it? 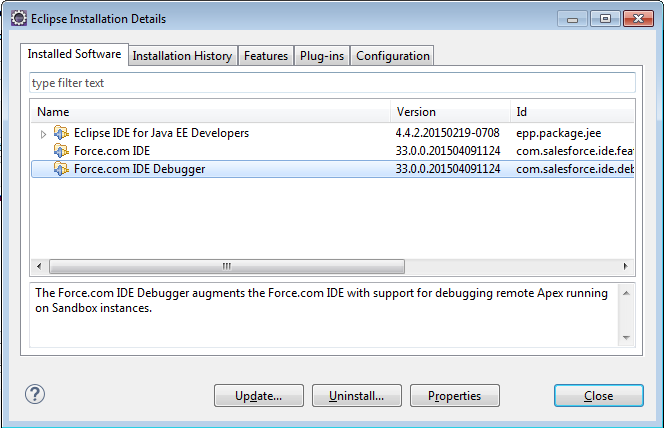 The debugger is a new feature coming down the pipes. A few months ago, a local salesforce.com developer demonstrated this feature on a development salesforce.com stack running on a Mac (they were accessing Salesforce on https://localhost/).

In the demonstration, they set breakpoints in the IDE, triggered a request in the browser, and showed us how we could see the current stack, memory variables, etc.

It included the ability to use multiple breakpoints, and it was suggested we would have the usual debugger commands, including Step Into, Step Over, and Stop (killing the current transaction).

They also noted some caveats, such as the fact that breakpoints applied to all users, thus the need for developers and testers to keep out of each other's way, plus records that are involved remain locked for as long as the debugging session was active (so, perhaps some governor limits involved, in case you leave the session open over lunch).

Finally, at the time of presentation, the feature wasn't going to be free for all, but pay to play. It was stated that, at that time, they were considering that this feature only be enabled in Sandboxes, not Developer accounts or production, and the asking price they were considering was some fraction of a full sandbox.

I sincerely hope that's not the case, since developers like me would not have access to such a cool feature. However, all we have to work off of for now is hearsay and speculation until the details are finalized. Since I haven't seen it in any release notes, I'm under the assumption it's still some ways out, perhaps Winter 16 or beyond.

There's absolutely no way to get your hands on this today, that I'm aware of. If you have an account executive, consider contacting them to be put on a beta or pilot list.

108
How do I start to debug my own Apex code?
53
Apex debugging in Winter '16 - how well does it work?
14
Debugging Apex Code using Checkpoints?
1
How to debug trigger in eclipse