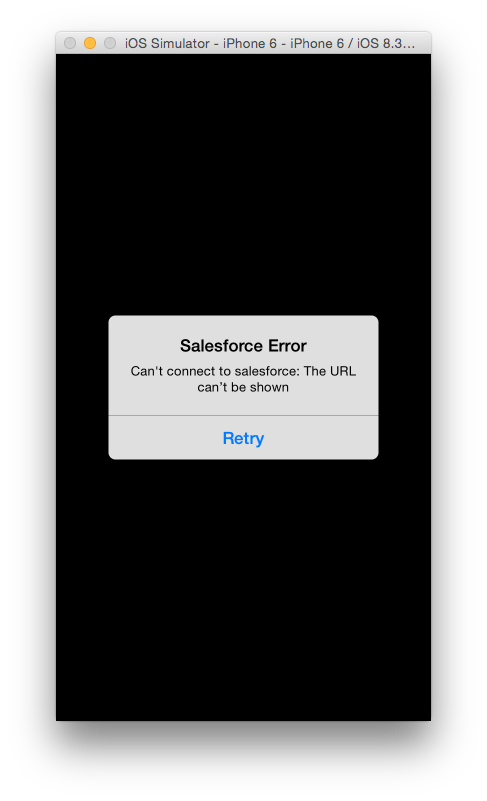 I haven't figured out why that happens, and now it's gotten worse- instead of showing the error, the app crashes. I believe the change is that it's running on iOS 8.3, although I don't have an 8.2 device available currently to test with.

I've determined that the crash is happening in SFOAuthCoordinator; it looks like SFOAuthCoordinator, acting as a delegate for the login web view, is receiving the message webView:didFailLoadWithError: and calling notifyDelegateOfFailure:authInfo:, which is calling self.authInfo = nil;, but at this point the object has been released (EXC_BAD_ACCESS in objc_msgSend). In the XCode console, the crash happens immediately after the above "Url can't be shown" error, so I suspect that fixing that would eliminate the crash. But I have no idea what causes this... the login page is just a modified version of the default SiteLogin page, and the login method is the default:

I was having the same issue today (how I found your post). I believe this crash is a memory management issue within the SDK, but I'll share my little work around. The problem is that the coordinator somehow becomes released before setting authInfo=nil;. This is all handled entirely in the SDK and crashes every time for me (not iOS 8.3 specific either). This began happening after I updated my SFSDK and converted login to use the success/Fail blocks instead of the delegate methods.

Basically, you just need to hold a reference to the coordinator so ARC won't let it go. I now have a strong reference that I hold in the view controller that manages the login web view.

Inside the .m file I implement the SFAuthenticationManagerDelegate delegate method.

I handle some other logic in here as well (activity indicator etc.). Obviously for this to be called you need to add your VC as a delegate with [[SFAuthenticationManager sharedManager]addDelegate:self];

Now when you set up your auth view handler like this.

Your delegate method will be called and you can retain a reference to the coordinator (must wait to set this as it won't exist on SFAuthenticationManager until the login view is set up). This is preventing the crash for me. Then just clean up your reference count in dealloc when you don't need the login view anymore.

Hope this helps, quite the frustrating little bug.

I've accepted @johnrechd's answer, as it allowed me to solve my problem. I believe it is also the correct answer for anyone making a native iOS app.

I had to make a few adjustments to make this work with a Hybrid app; here are the steps I took. This is @johnrechd's code, just organized and explained for the hybrid app's generated container:

Then update the AppDelegate interface declaration to implement the SFAuthenticationManager protocol:

Inside the @interface block, add the instance variable to store the reference:

Next, in AppDelegate.m, find the init() method. There's a comment in the code telling you where to add app-specific initialization; add the following code:

Just after the init() method, add the dealloc method and the delegate method:

That's it. In my case, no more crashes, although I am still seeing the "Cannot connect to salesforce" popup a heartbeat after seeing the login page with the usual failed login message; clicking ok leaves me stuck on an SDK "Loading..." screen forever. I'll add a link here to a followup question later.

Not the answer you're looking for? Browse other questions tagged salesforcemobilesdk-ios or ask your own question.