Now with standard reporting, the rendering is graphically missleading, because the x-axis is not linear. The gaps are causing a somehow random non-linear scale. Many people getting irritated and complain about such non-linear x-axes: 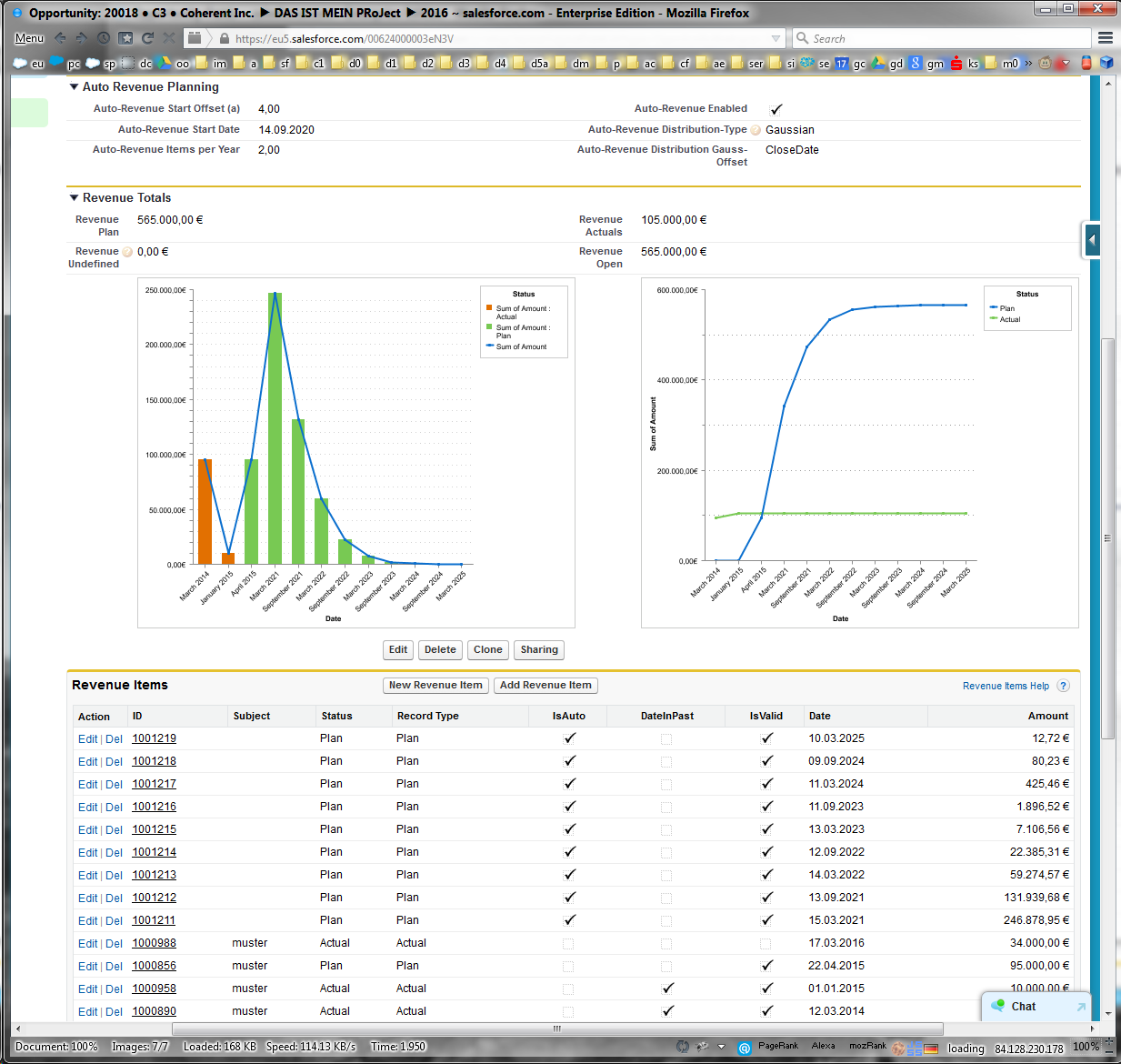 I found that it is not possible to avoid this behavior as described here: https://success.salesforce.com/answers?id=90630000000gkXDAAY - however in this article Matthew Lamb says that:

One way to trick it is to map a second data point that does have data across the entire range, then the blanks from your first set will show up.

My question is: how exactly this might work? I have created a second custom object RevenueItemVoid__c and created dummy records one by month for all months between 2010 and 2025 - that are 16 * 12 = 192 records.

How do I get them pushed into that report chart? I tried custom report types, joined reports, plot additional values, etc. but found only dead-ends maybe I'm not really a point&click developer by heart...

Also I don't figure which dummy relations aIhave to set on RevenueItemVoid__c, RevenueItem__c, Opportunity. I also don't want to create 192 item for each oppy. One pack of 192 should be the limit for the sake of db-memory-waste.

As you have discovered, Salesforce is weak at reporting on missing data.

You might try creating an opportunity with one zero value revenue item in each of the missing months. I suspect that such an opportunity might distort other opportunity reports. It can, of course, be filtered out, but users will need to be instructed to do this.

In your case, you could have a custom object, RevenueItem_IncludeZeroes__c, where each existing Revenue Item would have a clone in RevenueItems_IncludeZeroes. In addition to the clones, you would need zero value records for the missing months. A single scheduled job could do the following:

I don't know enough about your situation to tell you if RevenueItem_IncludeZeroes__c needs to be a master detail item or even if it needs to be related to the opportunity. In my case, I opted for simplicity and left the new object unrelated to existing objects (though it does contain enough info that I know what each records relations would be).

Not the answer you're looking for? Browse other questions tagged reporting custom-report-type charts joined-reports report-chart or ask your own question.

2
Reporting opportunities for users without roles
3
Report summarizing by every month based on an active date
1
How can retrieve the date value of the opportunity history record in reporting?
0
Reporting Install Date +90days
1
Reporting on post 90 days of completion date
1
How to create a report which include the formulas for every column without any grouping?
1
Report Grouping by Date
0
Converting Date/Time to Dates in reporting?