I have just recently started building Lightning Applications, and I do not understand why there are two Javascript components in each bundle. What is the difference between the controller and the helper? How do I know what code to put where?

In addition to what everyone else has said...

The helper is designed to have shared code in it. So, you could have code shared by your renderer and your controller or by multiple controller functions. That should go in the helper JS file.

I think that a good practice is to let the controller respond to events, possibly perform some amount of control flow, and delegate business logic to the helper as a separation of concerns. It also sets you up to be able to reuse your business logic in other parts of the component in the future.

Helper code can be shared among components when they are related through inheritance. If one component extends another it inherits its super component's helper and can override it.

Sub components can call super component controller methods, but that may be deprecated in the future according to the documentation in the Lightning Components Developer's Guide.

Components can communicate with each other via events to "share" code. For example, if you have a component that handles writing business logic errors in a uniform way in your app, and handles some sort of error related event, you could fire an event to trigger it to handle an error.

If you are more the visual type of person. Follow this link from Salesforce Developer's Blog: Understanding JavaScript Controllers Versus Helpers In Lightning Components
Here's what's under this link: 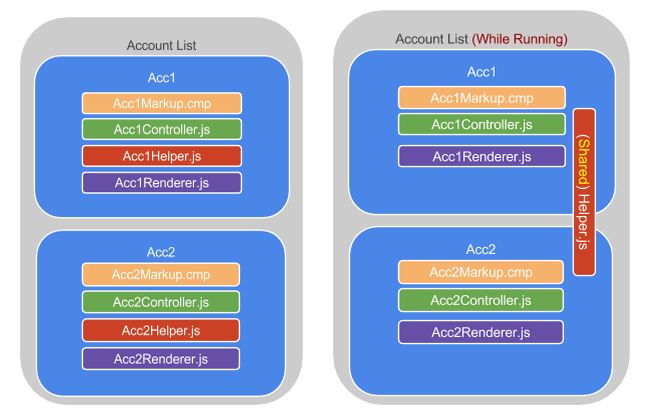 Each Account Component component (bundle) is made up of a markup, JavaScript controller, a Helper, a Renderer and more.

In our example with two Account components, the framework creates one copy of the Helper and passes the reference of this Helper into two controller and to two renderer instances.

So we should try to delegate business logic to Helpers whenever possible.

For example:
Instead of:

Note: If there are multiple types of components (say, AccountItem.cmp and AccountDetails.cmp), each component type will get a helper of their own.

When To Use Controllers v/s Helpers:

Anti-Pattern(s):
Too many functions in the Helper: If you get into this situation, it’s time to refactor the component itself into smaller sub components.

A controller contains functions to handle events in the component.

A helper contains utility functions that can be reused in the component bundle; for example, by a controller and a renderer.

You don't have to use a helper but it can be helpful (pardon the pun) for reuse. It also keeps a better interface in the controller in that each function in the controller can be called by {!c.controllerFn} in the markup. You probably don't want markup calling {!c.utilityFn} so you can stick utilityFn in the helper instead.

Every component ,if you have client side logic or a server call ,you will put all in the client side controller .

To help our code to modularize ,every bundle is provided with the helper .

Helper functions are local to a component, improves code reuse, and moves the heavy lifting of JavaScript logic away from the client-side controller where possible. The following code shows the helper function, which takes in the value parameter set in the controller via the item argument. The code walks through calling a server-side action and returning a callback but you can do something else in the helper function.

Example on how to use this

My helper function will be as below

Using my helper function as you can see I can use this to send different parameters .It is very similar to utility method concept in APEX where we can reuse the method .It helps to keep code modular .

Not the answer you're looking for? Browse other questions tagged javascript lightning-aura-components lightning-apps or ask your own question.