FIELD_INTEGRITY_EXCEPTION Must specify a nameField of type Text or AutoNumber

FIELD_INTEGRITY_EXCEPTION Must specify a nameField of type Text or AutoNumber CODE:

The other answer mistakenly assumes there is an existing Custom Object and we are getting an error when creating new records for it.

The question is actually regarding use of the Salesforce Metadata SOAP API from C# to create a Custom Object that did not previously exist. It has nothing to do with creating new records in an existing Custom Object.

It's nearly two years later, and I hit the same problem. Nothing I found gave a working answer, but I found three places online (including this SE question) where someone was asking how to solve this problem, and did not get a working answer. (I attempted to include the links here, but SE didn't like it, so you'll have to take my word for it. :) )

Why this solves the problem:

Microsoft Visual Studio (even 2015, which I'm using) has a "feature" (extremely poor design IMHO) where, when generating .NET code from a WSDL file for a SOAP web service, optional properties are botched in a workable but not-nice way.

You would expect that setting a value to the optional property would be all you need to do.

But actually, you need to set a value to the optional property, and also set the corresponding ...Specified property to "true".

On the CustomField object, the "type" property is optional. Due to this bug/quirk/design-flaw/"feature" in .NET's default handling of WSDL, setting the CustomField.type without also setting typeSpecified = true, has the same effect as not setting the type at all.

To get more technical, the problem occurs at the point of serialization to XML. The XML serializer will not output to XML, any optional property where the corresponding ...Specified property == false.

I don't think I'm exaggerating to say that this simple actually working C# sample code for creating new Custom Objects through the Metadata API, including the simple, correct, instructions for connecting to the API in the first place, would've saved me a few days of effort. I hope it helps someone else!

Every object that you create in Salesforce has some standard fields. One of them is called Name. This can be in the format of Text or an auto-number and you must specify a value because it is mandatory. You can see this by going into Setup -> Create -> Objects -> Your Custom Object and under the Standard Fields section you would see the field Name and click edit next to it.

If it's selected as text then you can enter any value, if it's specified as auto-number you must populate according to the format. As you can see in the picture it can be A-{0000}, where A is the code of the custom object and the sequence of numbers are how big the auto number can be 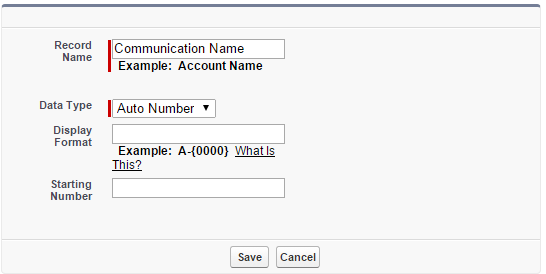 So in your code you should do something like this: