How to retrieve the triggered record information in CloudPage Marketing Cloud

I would like to have "Add to Calendar" in the Email. My idea is to write the code to Javascript to generate file.ICS in CloudPage and link it with the button. When the Email receiver clicks on the button, the file.ICS will be downloaded. 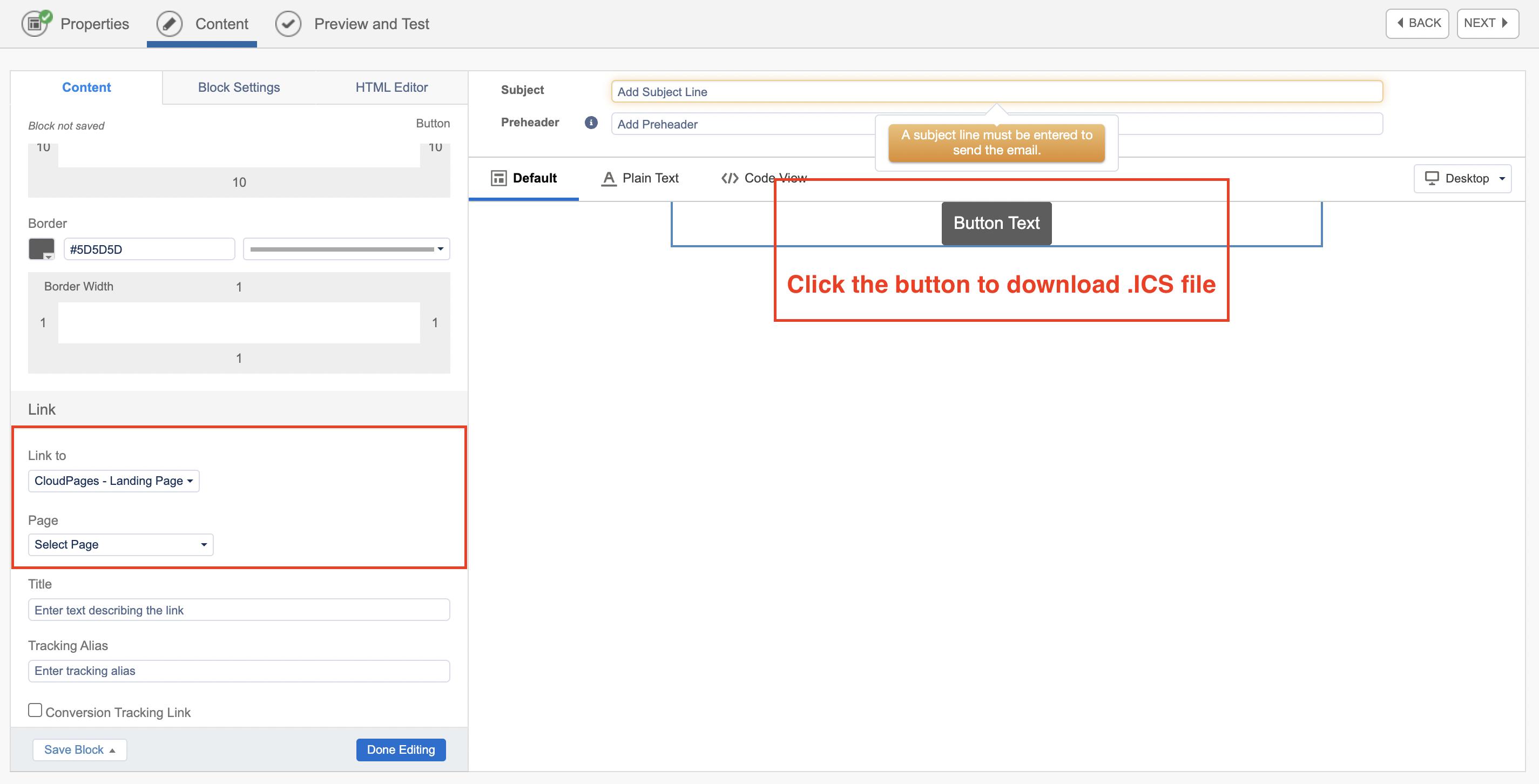 Bit of an overreach here, but I can provide a pretty generic reference draft for the whole "generate .ics calendar invite" workflow. I figured it would be easier to share it whole than dissect it to illustrate specifically the part about sending data, which is of course the integral question.

Both relevant ways (sending data in an encrypted link & looking data extension data up a cloudpage) are used in the solution.

The base .ics creation solution for this was presented at Dreamforce 2019 by someone else (thanks!!), so I cannot by any means take full credit, just expanded upon it. Just take that as a bonus.

This "calendar invite" solution has the following parts:

A) assets anywhere in the system (parent or child) that want to link to the "inviteGenerator" cloudpage using encryption. Assets could be an email, could be a cloudpage. So we will just set up a code block (type code snippet) that we can reuse anywhere. The code snippet creates the encrypted link and sends data to B. You can use it in emails or cloudpages alike.

B) A cloudpage (the "inviteGenerator") that creates the .ics event invite based on encrypted input data. This is a code resource of type text. It is in Parent BU. It is accesses through the link created in A, wherever that is placed.

C) A data extension with the metadata about your event. Let's assume it has the following fields:

these are all text fields, you can of course get more creative with what you want to show in the ics invite.

Note that the dates in this data extension are meant to be in Marketing Cloud system time (UTC-6). UTC-6 is also how dates come through MC Connect, in case you get the dates from Sales Cloud. The invitegenerator takes care of switching times to UTC, which is how an .ics file wants a datetime to be. It is in the same BU as A.

general workflow: assets send encrypted input as URL parameters. Based on the encrypted base input it receives, the cloudpage will do a lookup for the event metadata (startdate, enddate etc) from DE C, and potentially, personal Data from D;

that way the data would be pulled at the time of click, which is the most up-to-date you can get this to be - in contrast: data sent in the Button URL as encrypted parameter is "frozen" from the time of email sendout and changes after sendout will not reflect. What's "better" here is more or less usecase dependent. You can of course just send more encrypted variables in the link instead of the lookup, if you think that suits your case better. In a connected SFSC / SFMC setup, what would be EVEN FASTER is to retrieve the data directly from an SFSC object on the cloudpage (RetrieveSalesForceObjects() function). But that assumes you have an object for this, and if, I am generally a fan of retrieving data this way as little as possible. I'd likely just deal with a 15 minute delay from MC Connect data stream instead and lookup from (synchronized) data extensions.

some more background reasoning and preparations on the encryption:

I want the inviteGenerator cloudpage in the parent BU so I have it in the central admin layer.

But: I want emails or pages anywhere in the system (parent BU, all child BUs) to be able to call it.

So I am not going to use CloudPagesURL for encryption. That is totally feasible and an easy shortcut, but would require the inviteGenerator to be in the same BU as each asset - that means I might have to duplicate the inviteGenerator code and store it in two BUs at some point. And no one likes managing copies of the same thing.

Here is how this is done across BU borders: AES Encryption in Ampscript

Ensure that the same exact keys with the same customerKeys are in the location of the asset and the service, in case asset and inviteGenerator are in two different BUs.

Note that this is not meant for bulk sendouts in the millions, where you would want to hardcode the encryption params in both A) and B) instead of looking them up by their external keys for better performance. In a one-to-one journey it's totally fine.

Set you a DE "myEvents" which holds the dates and all relevant metadata for your event. Place it in the Parent BU. It will be accessed from within the Parent BU (Cloudpage B), so whether it's in a shared or non-shared folder doesn't matter.

See above for rough field schema.

create an encrypted link sending customer specific data to the "inviteGenerator" at https://mcxxx-731pw3vrp4.pub.sfmc-content.com/xxxxxxxxxx

That link in @calendarUrl sends the inviteGenerator three encrypted things.

This becomes your inviteGenerator. It will take encrypted data from the link created above, decrypt it and create an .ics event from the information that is downloaded upon click on your link:

note that this solution doesnt cover how to get the firstname and lastname variables - it'll always be "valued customer", see comment in the code for part 2. That would just need two simple lookups into Data extension "D" to be improved.