Is it possible to get a Custom Setting without the cost of a SOQL query and at the same time do it DYNAMICALLY without hardcoding the setting?

Once I had the illusion that accessing custom setting is always free and does not consume any governor limits. Until today: I've learned the hard way that this is only half-true.

It is true, that this comes without the cost of a query:

But this DOES cost you a query

Now how can I get the setting dynamically in a way that my code runs on every org regardless of the existence of MyCustomSetting__c? I need to hide the setting from Salesforce so that I can use something inside of a try/catch. If the setting does exist I need to get some values. If it does not exist I fall back on default values.

Additionally I need a way to update records of the settings synchronously in trigger contexts.

I've tried to use CustomMetadataType instead. It failed.

CustomMetadataType (CMT) is similar to CustomSetting (CS) and CMT looked very promising at the first glance. I watched this video from 2019 where CMT is advertised as more powerful successor of CS. Especially this slide convinced me to give them a shot: 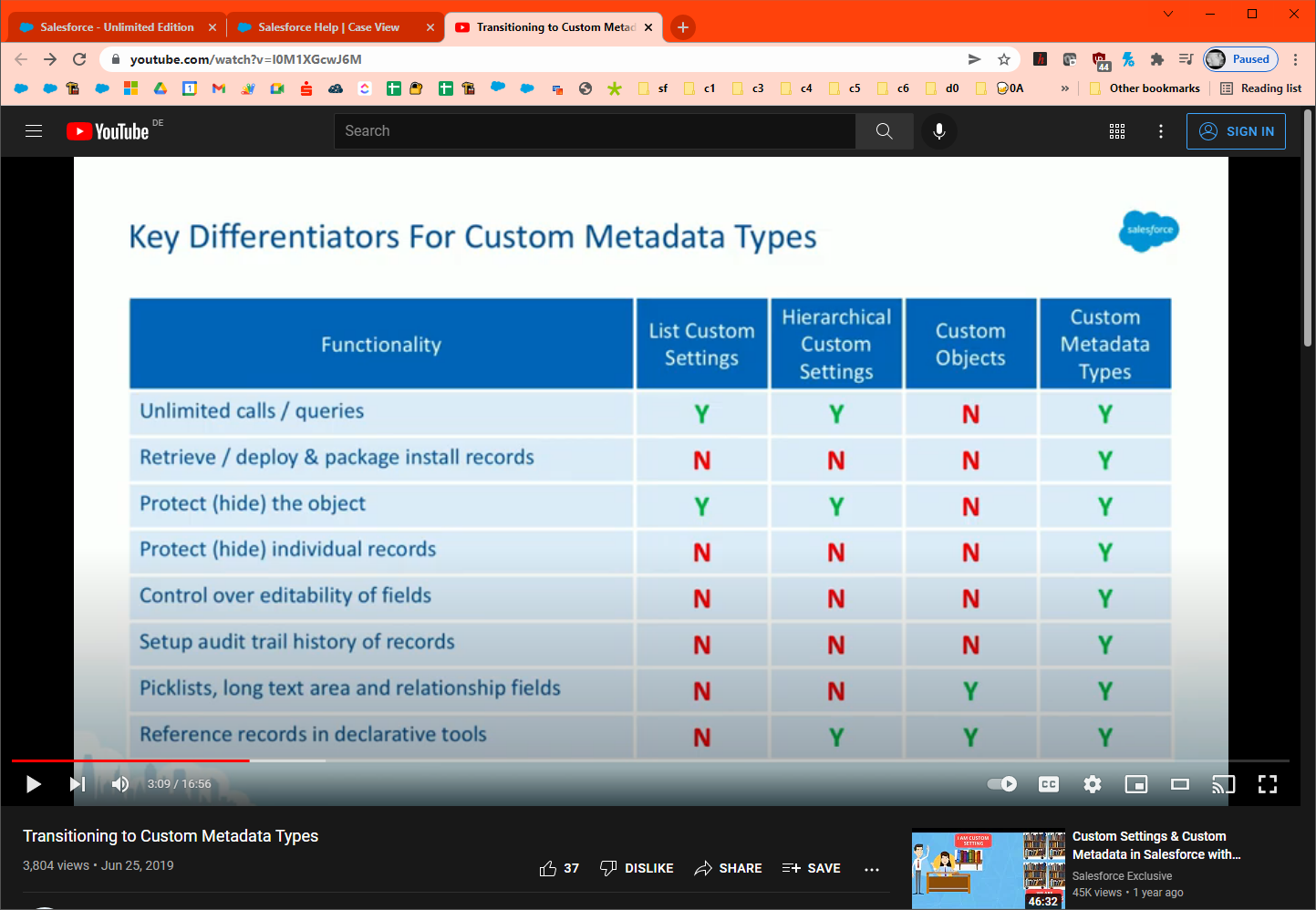 BUT in fact CMT is unusable for me, because it does not support DML to update records. Records can be updated asynchronously with APEX. Not sure if this works in trigger context, but the possible timing issues are not acceptable for my requirements. I need updates of records in sync.

So I would not agree that CMT is on par with CS in all aspects. DML and in sync updates are crucial for some scenarios.

There's no way to do this directly; there's no unique common parent type or interface, we can't access namespace properties dynamically, we don't have proper language reflection, etc. Basically, the type system in Apex isn't robust enough to allow us to do this.

The closest you can get to would be to introduce an interface and wrapper classes.

Which you then use dynamically:

You still have to write a new class for each custom setting, but now you can dynamically select from any of those custom settings by name.

It would be nice if we had some way to do this directly, but that just doesn't exist in Apex. If you really want to save those SOQL limits, and want dynamic access, you have to build it yourself.

As a side effect, you still have a hard-coded reference to the setting, so it must exist in the org. You could, I suppose, package additional extension packages so that the setting and the interface implementation are in can be installed separately, with the interface in the core package.

As such, it's expected that using SOQL to query Custom Settings would count against your query limits. Your best bet would be to leverage the other answer or optimize, as you've probably done, to make sure you're limiting the amount of queries you need to make.

custom metadata types are primarily intended to let you develop peers of Salesforce standard metadata types, such as custom fields, tabs, or workflow rules (obviously in this first release we don’t have the power required to duplicate all the functionality in these types).

Below are some ideas worth upvoting around these limitations:

Not the answer you're looking for? Browse other questions tagged apex soql governorlimits customsetting dynamic-soql or ask your own question.

3
Database.query not returning records properly as needed
22
Why are Custom Settings lookups not counted against SOQL Query limits?
8
Can you do a SOQL Query on a Hierarchical Custom Setting?
2
How to get the server timestamp through SOQL query or REST API?
6
DML Limits are reset when?
0
Is there way to include and exclude characters in same field in SOQL query?
0
Trigger works most of the time, but sometimes I get this error: System.LimitException: Too many query rows: 50001
3
Do Process Builder/Workflow Actions count against DML/SOQL governor limits?