According to the documentation, you should be able to run a SOQL query where you filter on the type for a Polymorphic relationship. And this works in most cases. However, there's a conflict when the relationship includes the Case object because the Case object has a built-in field called "Type" which conflicts with this implicit Type field.

This will return no data, This query is actually looking in the Case.Type field for values.

The same would be true for any other object that has a built-in Type field.

I thought I was clever, so I tried the following:

But that is not having the expected result. I can't seem to get any of the records where the WorkItem type is Voice_callback_Request__c because SOQL is always querying the Case.Type field.

Since the Voice_Callback_Request__c object is the only object that has that Callback_Phone__c field I presumed it would filter to just those two types of objects. However, because Case doesn't have that field I receive this error:

I also considered filtering based on the prefix of the Id field and that would work, the only issue there is that we have several different environments (dev, uat, staging, production) and so the custom objects will have different prefixes in each environment.

This seems like a bug. The issue is that "Type" should be reserved word and not available for use as a field name in any object. Alas, this is not the case.

Does anyone know if there is some workaround available here? Is there some way to indicate to SOQL that I want the object type rather than the Type field of the Case object?

I can't speak for AgentWork.WorkItem as our org doesn't use this but the following works just fine:

and returns records from any Task with a WhatId pointing at a Case or Asset - even though Case.Type is a standard field

Does the schema (use Workbench) actually define a polymorphic relationship for AgentWork.WorkItem? That could be the root of your issue and you might need to use two queries

According to Salesforce Support, this field is not polymorphic. I assumed since the workbench object shows "polymorphicForeignKey: true" that the field is polymorphic. But, Support responded that in order for a field to be polymorphic, relationshipName must not be null and namepointing must be true. Here's the info for the AgentWork.WorkItemId field: 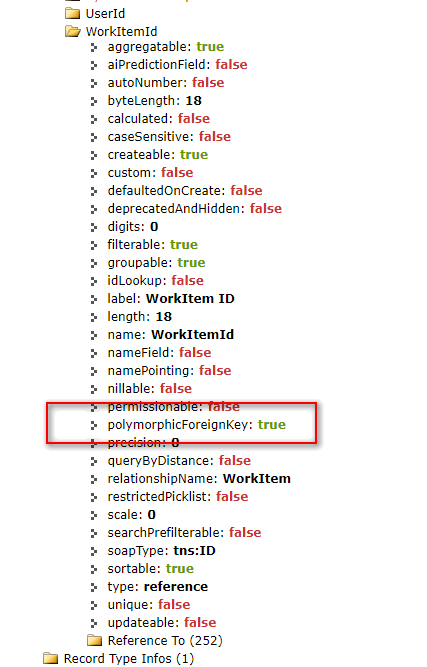 Their suggestion for a workaround was to run either a subquery or run the query where the WorkItemId LIKE '[Object Type Prefix]%'. The latter is what I ultimately ended up doing, but I think it is an inelegant solution.

Not the answer you're looking for? Browse other questions tagged soql case polymorphic agentwork or ask your own question.

11
Why does 18-character ID casing matter in a SOQL WHERE clause?
13
SOQL help with subquery where clause
2
SOQL query minimum Date in WHERE clause
1
SOQL: Compare result of Date Function with Date Literal in Where Clause
3
Dynamic SOQL Query not accepting custom object id in where clause
9
Picklists not Supported in SOQL WHERE Clause (External Objects)
0
SOQL Lookup != null condition in where clause is Selective or Non Selective?
1
Security review for a managed package with Polymorphic SOQL queries