Deployments across orgs that are different versions

I am working in an environment where my Dev sandbox is API 53.0 and my destination QA sandbox is API 52.0. I use the metadata api to deploy changes but I am running into some frustrating issues when trying to deploy to an org that is a version behind.

I am trying to push Profile changes to QA but there are properties of the profiles that only exist in my Dev org because of new features/installed packages introduced in 53.0. These new Profile properties try to deploy to QA and error out because they don't exist.

My current work around is to retrieve metadata, CRTL+F that property in the metadata config files, delete it, and re-deploy. This works but it is a major pain and it is preventing less technical team members from being able to move their changes to QA without my assistance.

Is there a deployment setting I can adjust to have it ignore properties that don't exist in the destination org? I run into this issue of my Dev sandboxes being ahead of my destination sandboxes a lot so a long term solution to this would be appreciated. Thanks in advance!

A better way of dealing with this in modern development is to use Scratch Orgs and Salesforce DX. This way, you can always develop code and metadata in the version you desire, rather than dealing with the timings involved with Sandbox refreshes. You can even use Unlocked Packages (for customers/consultants/etc) or Second-Generation Managed Packaging (mostly for ISVs) to deploy your changes to any org. You can use the release property of your Scratch Org Configuration File to control if you're creating a previous version org or a preview version org (available only during release windows). This way, you don't end up with any surprises. Also, you can use sfdx force:source:pull and sfdx force:source:push to retrieve and deploy changes to an org without specifically tracking which changes you've made (for Source Tracked orgs only, though). In short, if you're still suffering from these sorts of issues, you probably want to look into SFDX. If your Dev org doesn't have a namespace, you can also enable Dev Hub to keep track of your Scratch Orgs in that org. It has a limited capacity for the number of orgs you can create daily and keep at once, as well as version creations, but if you're using your own Developer Edition org, it should suffice for your use case.

As an example, metadata types may have new attributes or even change the structure. This should cause no issue if you still set your API to the current version in your commands/release steps (retrieve/deploy)as it's version-specific.

There are sometimes things that are new that are there for all versions. Profiles are definitely the big culprit here. New standard objects can be added which will add a new ObjectPermission reference or, in your specific example, there's a new UserPermission like ViewDeveloperName that is exposed/returned in all versions.

You don't have any options other than doing what you've noted:

Going forward, however, I'd recommend avoiding this situation and forcing your sandboxes to stay on the current version to avoid this pain. This assumes your release process relies on certain static sandboxes (ex. Dev --> QA --> production). Having them all on the same version will obviously make things smooth and you can do smoke testing for the newest version in a separate sandbox.

To do the above, Salesforce always provides a list of which sandbox instances are on preview (upgrade automatically) or non-preview (no upgrade, stay on current version). There's a certain window (~a week) where refreshes will be routed to preview instances and after this window refreshes will be non-preview. This is typically noted in help documents, but you can use the Sandbox Preview Guide which explains all of this when you pass your instances you're interested in as shown below: 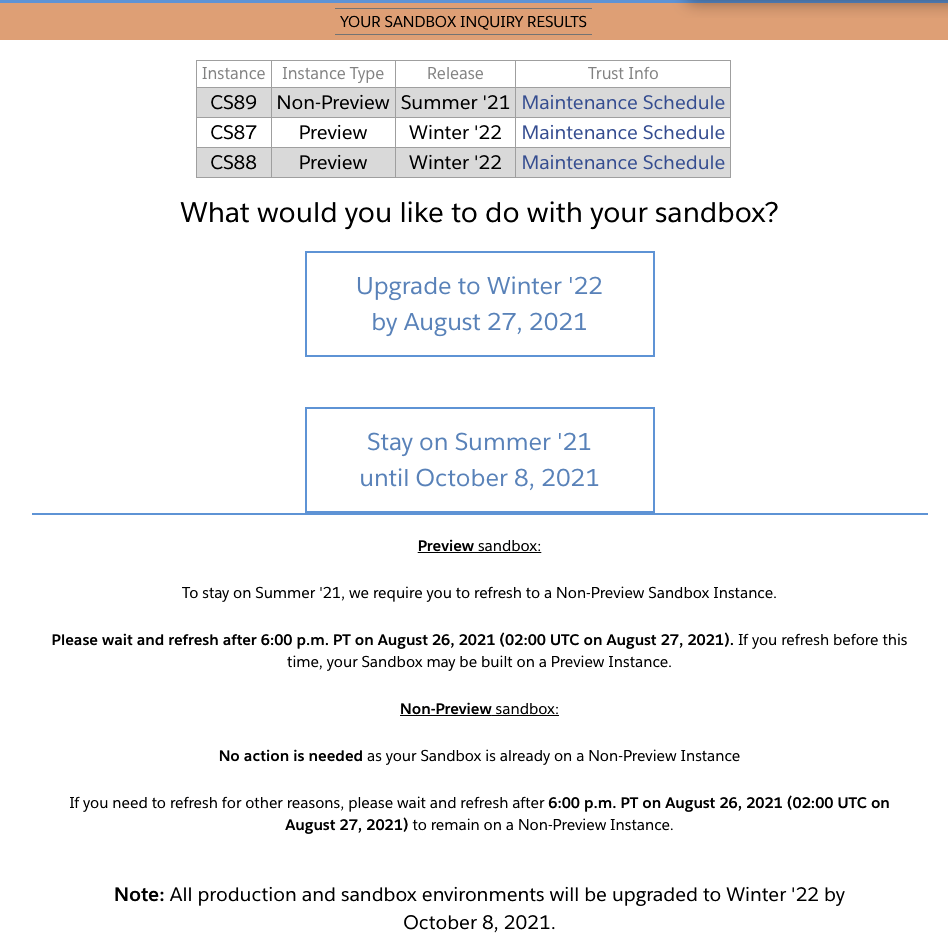 Not the answer you're looking for? Browse other questions tagged deployment metadata-api profile or ask your own question.

16
Problem when deploying FlexiPages on Winter '22 org --> "The 'xxxx' component instance doesn't have an identifier specified."

13
Why is migrating changes between multiple orgs such a pain
6
Deploying an Apex class with a dependency on an older managed package version
3
Test class completes successfully in production AND newly refreshed sandbox, but fails on deployment
2
How to deploy a lightning community alongwith its standard pages between orgs
0
Custom Metadata Error: Developer name already exists for given entity or has been previously used. Please choose a different name