How do I change the running user of a platform event trigger handler?

Our org needed to change the running user of a platform event to support automated chatter posts, since the Automated Process user can't access the ConnectApi. I just spent several hours piecing together information from around the internet, and running trial and error scenarios, to finally succeed in changing the running user.

I couldn't find any practical, start-to-finish tutorials that covered everything I ran into, so I'm posting Q&A style to help others avoid the pitfalls I ran into. These steps make the following assumptions:

If the above don't apply to you, then you may still benefit from these instructions and linked documentation; certain instructions may simply need be adjusted to fit your situation.

First, let's lay down some concepts. Platform events can have a variety of subscribers aside from apex triggers. To generically configure the system's behavior for all of these subscriber types, Salesforce thus had to create a separate kind of metadata (in addition to the trigger's metadata definition) to expose configuration settings for platform event subscribers.

This new metadata type is called PlatformEventSubscriberConfig. Unfortunately, at the time of this writing, there is no user interface that allows us to create and edit subscriber configs. Instead, this has to be done through manually creating the XML in VS Code (or a similar editor), then deploying the XML to the relevant org.

Prepare Your Project For PlatformEventSubscriberConfig

The first task at hand is to prepare your local copy of metadata to retrieve and deploy this metadata type. In your manifest.xml, add the following code:

Next you need to create a directory to hold local copies of the new metadata. If your org already has metadata of this type, the directory should be created automatically when you right-click package.xml, and run "SFDX: Retrieve Source In Manifest From Org". If this is your org's first subscriber config, you'll need to create this directory manually.

Find the project subdirectory that contains your other metadata type folders (typically "force-app/main/default". Create a new folder called "PlatformEventSubscriberConfig". The above documentation calls for an upper-case first letter, unlike other directories (like "aura", "objects" etc.). Capitalization may be irrelevant; in my case, using a capitalized directory name (on a macbook) worked as expected. Once this directory is created, your local project should be configured to receive and deploy this metadata type.

The next step is to create a local copy of your new subscriber config. The first thing here to get right is the filename. The above documentation says that it should "have the suffix .platformEventSubscriberConfig". The full filename suffix however should be ".platformEventSubscriberConfig-meta.xml". The filename prefix can be any valid identifier that you like; a reasonable naming convention might be to use the same prefix as your trigger handler. For example:

Next, open the new metadata file you created, and define the XML for the subscriber configuration. Particular attributes are defined in the above documentation; you can use the following example as a model:

Of particular note is the user tag, which changes the running user from Automated Process to alternativeuser@example.com.mysandbox. This must be a valid username from the org to which you're deploying the metadata. If the org is a sandbox, and the user originated in production, then it will need to have the name of the sandbox appended to the end of the username, as this is what Salesforce does during a sandbox creation / refresh. This will cause a changeset deployment from sandbox to production to fail, because usernames are different between production and a sandbox. However, according to one user's tests, the system behaves as expected when metadata is migrated in the other direction. A sandbox refreshed after the metadata is deployed will have its username automatically updated to include the .mysandbox extension. Ultimately, this means that we have to deploy the metadata to production through VS Code, where we can remove the sandbox extension when we're ready to go live.

In addition to changing the running user, you can set a reduced batch size for the platform event delivery system. The default is to process 2000 events at one time; this usefully allows delivery to handle smaller chunks. platformEventConsumer should be set to the name of your apex trigger (without the .trigger suffix). the masterLabel can be any human-readable name for the configuration.

When you're ready to test your configuration, you can deploy the config via right-clicking on the metadata name in the VS Code sidebar, and selecting "SFDX: Deploy Source To Org". 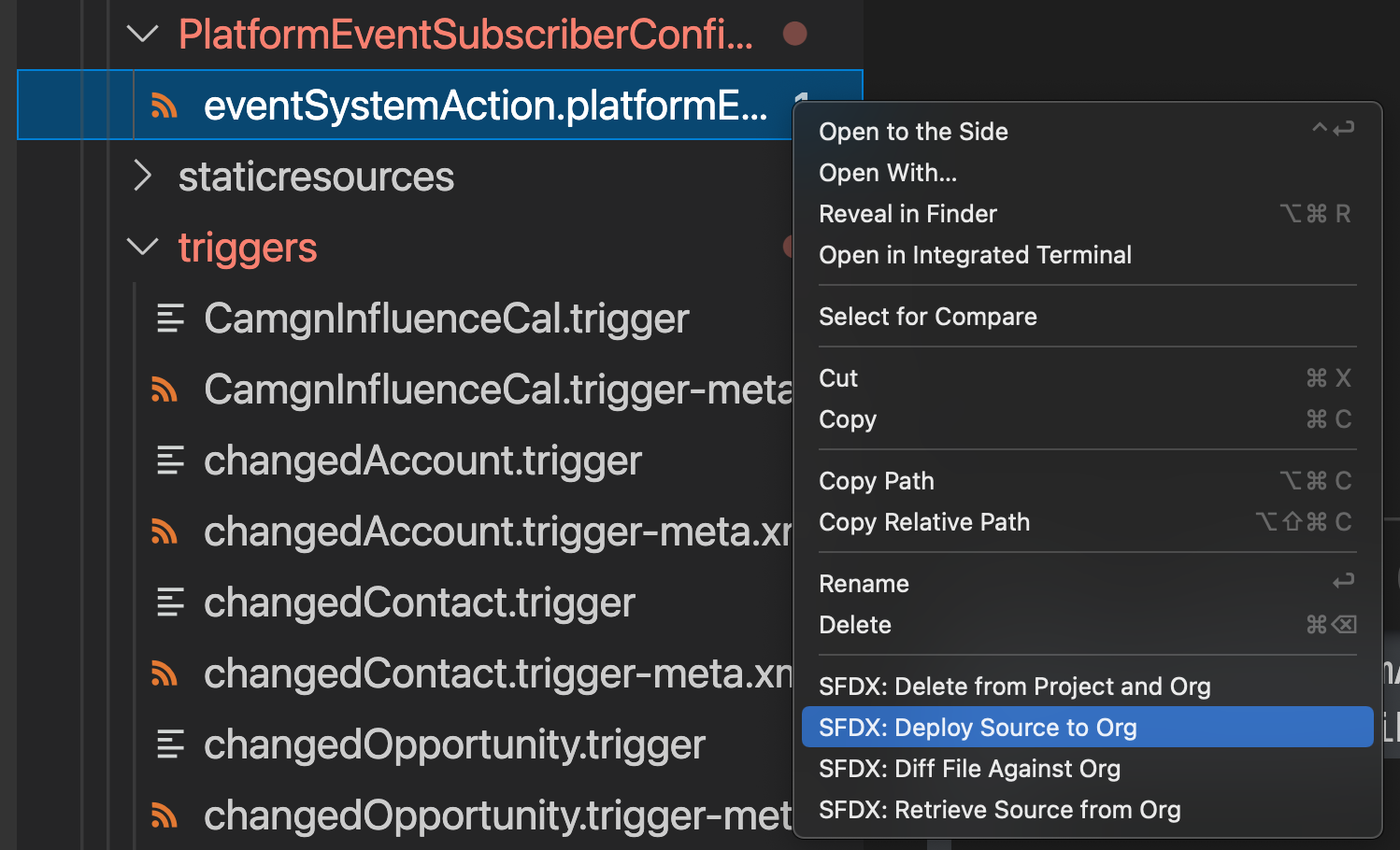 After deploying to an org, you may need to suspend and resume the trigger handler before the changes will take effect.

I hope this helps! Here's some additional documentation that I found useful:

Not the answer you're looking for? Browse other questions tagged trigger platform-event platformeventsubscriberconfig running-user or ask your own question.

8
How do I successfully Deploy a Configuration Component for a Platform-Event Trigger to Override the Automated Process User?
3
Set user in PlatformEventSubscriberConfig