I was trying to upload to a Salesforce dev org, a Lightning Web component called "myFirstLwc", and i have this error:

No base file for markup://c:myFirstLWC

I kind of know why. At First "myFirstLWC" was the name of the component. Then i found out a component being used inside another one, needs to be camelCase, so if the name is

in the code, it becomes

so in vscode, i renamed the files to be:

In Metadata, i also corrected:

So now i don't have any mention to that "myFirstLWC" string, and i looked in the entire project

After deleting the component in the org, i thought i could now upload it with correct names. But computer says "no":

No base file for markup://c:myFirstLWC

now i'm trying to correct this, with all possible sfdx commands or even workbench, but nothing. I don't know if it should still be here, but: 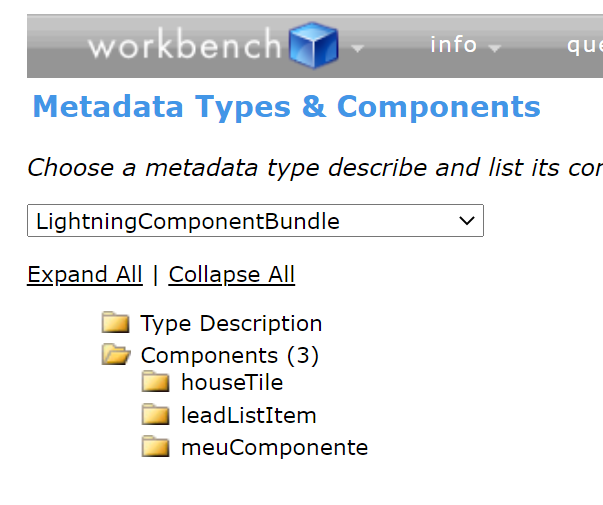 Those are the other LWC components uploaded before

sfdx won't help me debugging in a dev org:

ERROR running force:source:push: This command can only be used on orgs that have source tracking enabled, such as sandboxes and scratch orgs.

Odds are, the reference is in your project folder under .sfdx/orgs/*org-name*/ in two files, sourcePathInfos.json and maxRevision.json. These files are not searched by default, however, they would be the most likely cause for this problem. The fix is rather easy. From your shell, just do:

This will purge all your cached metadata, and should set you off with a clean slate. Your next push/pull/deploy/retrieve may take longer, as the cache needs to be rebuilt, but this should fix your problem.

Not the answer you're looking for? Browse other questions tagged lightning-web-components salesforcedx metadata or ask your own question.

3
After summer'19 upgrade in APAC (AP8, AP7, AP15) i am unable to get to LWC record pages
4
SFDX CLI initial deployment failure: chicken and egg?
0
getListUi for metadata in LWC
0
Metadata dependency error
3
How do we handle additions to page layouts with SalesforceDX / 2GP?