Does manually unsubscribing via All Subscribers import hurt deliverability?

I’m going through IP warming of our dedicated SAP. We have bounces around 15% from house lists. I want to manually unsubscribe these bounces, but will those hurt my deliverability and sender reputation similar to a recipient unsubscribing?

The ISPs are not aware of those internal unsubscribes, so this will not have any negative impact on your reputation. Are you starting your warmup by sending to the most recently engaged subscribers? I would be surprised if you are seeing such high bounce rates with these. Did you check the reason for bounces? If these are block bounces (due to poor IP reputation), you should not unsubscribe these recipients, but keep sending to them. You can check the bounce reason under Email Studio > Tracking > Sends, and click on the corresponding number, like in this example:

Also, do familiarise yourself with how Marketing Cloud handles bounces, as these will in some cases be automatically prevented from receiving future sends, when they are marked as undeliverable. This flowchart gives a good explanation of this: 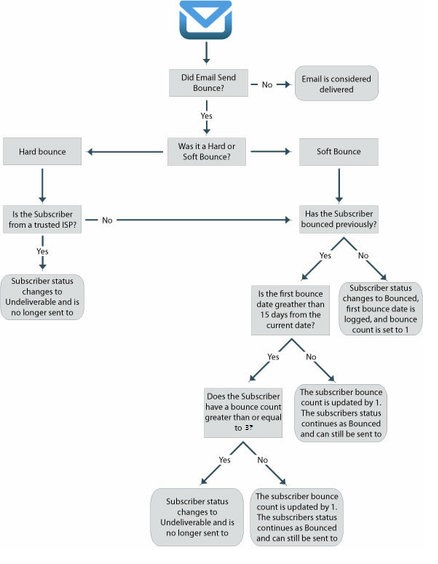 No. Reputation is a thing that is determined by an Email Service Provider like gmail / microsoft and can be aggregated (e.g. SenderScore), but really it is first and foremost something that each vendor handles themselves.

You have to understand what the purpose of all this is. Email Service Providers do not want to "pay for" handling unnecessary traffic that clogs their servers, meaning unwanted emails sent by, say, spammers.

If you unsubscribe a gmail address manually, that means less traffic on gmail servers. First of all, following the logic above that's great for gmail, especially if you unsubscribe the recipient for a good reason. They really have no problem with that. If anything, they would probably RAISE your reputation for it. But alas, gmail is not informed. Anytime you'd press a button inside SFMC, a request would have to go out to tons of vendors like gmail, hotmail. That does not happen. The only effect that they would notice is: The gmail address gets no emails from you - in other words "nothing". On an individual level, that has zero effect on reputation.

Another point is: Do you have a source that tells you that unsubscription IS bad for reputation for some vendor? Unsubscription is not necessarily bad, it's actually a sign that people CAN unsubscribe from your messages, which is very much wanted by everyone in the industry.

If unsubscription DID hurt reputation, then vendors would pretty much incentivize every sender to remove all unsubscription options in order to not hurt reputation. That would be illogical and hurt themselves, because it would mean more unwanted traffic. Even having in mind that each vendor does their own thing here, I know no sources that say this is a thing, and I would argue, this does not happen.

Not the answer you're looking for? Browse other questions tagged marketing-cloud email deliverability or ask your own question.

0
Where does one see logged unsubscribe events
0
Sender score and side effects releated to mailinator.com or maildrop.cc
1
Unsubscribing a subscriber from all subscribers using Ampscript
0
High number of block bounces reported this week for some reason
1
Unsubscribing only from publication list not all subscribers
1
Adding private domains for sending without additional dedicated IP
0
Marketing Cloud Emails from New SAP going straight to Outlook Junk Folder
0
Will email spikes hurt my deliverability after IP Warming?
0
Customer wants to use a new sending domain but with the same IP - will this require an additional SAP package?