People who code: we want your input. Take the Survey

I am trying to get the references for methods defined in Apex Class via Tooling API ( by REST Call ). Please find the information of the REST Call below ( using Workbench )

When i make the above REST call, i am able to get lot of information including "Symbol Table" but for all the classes references is coming as Null. But almost all the classes are being referred by some other class, so ideally it should be populated.

Screenshot of the Symbol Table having Null References 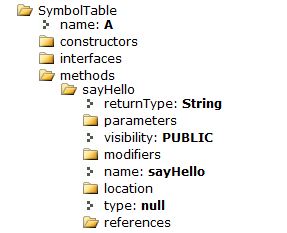 Can anyone provide pointers why its not fetching the references?

The Tooling API documentation is a little shallow in this area, it does not go into the specific meaning of all the fields returned. I don't see any description for the "type" field, which i can see is null indeed give your test Apex class use case. I sometimes find reviewing the WSDL for the SOAP version of the Tooling API helpful, sometimes we find the fields has some enum values, though not so in this case.

To understand what this field might represent take a look at how the above XML Schema type is used throughout the XML Schema in the WSDL, eventually if you follow the type inheritance, you will see that "VisibilitySymbol" extends it, and that this type is in fact used in to also represent Apex properties in the SymbolTable, which i assume your test Apex class does not have? As the "properties" field is not present above. In this case as you can see below the "type" field is present and describes the Apex data type of the property. 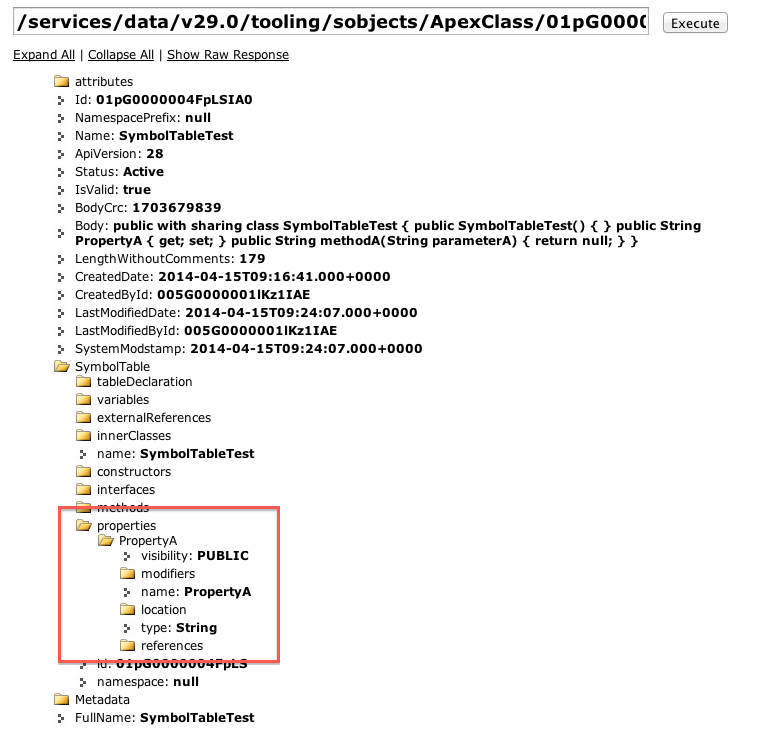 RE: Presence of External references

As per the documentation on the ApexClass object in the Tooling API documentation, this information is not present.

If there is not a cached version of SymbolTable, it will be compiled in the background and the query might take longer than expected. The SymbolTable returned from ApexClass does not contain references; to retrieve a SymbolTable with references, use ApexClassMember.

It is only populated when you query the ApexClassMember object. The downside here is you can only access the ApexClassMember Symbol Table after you have performed a compile, which requires learning about MetadataContainer's and another object called ContainerAysncRequest. If you review the MetadataContainer documentation there is a summary of the process at the bottom of the topic. Note that is an async process and thus requires some polling approach in your code as well. If you want to see the process in code you can review the code for the Apex UML open source tool here, although the code is Apex, the process and steps to call the REST API are the same.

Not the answer you're looking for? Browse other questions tagged tooling-api rest or ask your own question.

5
Access Tooling API via REST from Apex class
3
How to find Dependent Components for a Class/Page/Trigger using API (Tooling or Metadata API)?
1
Call a flow in apex REST
3
Trying to get methods references using REST version of the Tooling API
3
The Coverage field from ApexCodeCoverageAggregate isn't returning coverage lines in Spring '16 (v37.0)
0
Access SymbolTable methods field using Rest Tooling API
1
Tooling API : how to query on Salesforce Standard classes?
1
Do we have `setQueryOptions` for tooling API?