I want to take my company to the next level - and start implementing Version Control and also CI/CD workflow process.

I tried investigating a bit, and also start working with BitBucket - but just found myself wondering about the best strategy to manage the transition.

Today, we are small team (2 developers and few admins), and we are all working on the same enviroment (full sandbox - due to data dependency for new development testing).

I want to understand - what is the approach in which I should build my strategy ? Important to say that we are not doing any changes directly on Prod - but only on full, and after qa - moving the changes to Production.

Also, for the start - I just want to implement this process for the dev team. Should we create different sandbox for each developer and pulling any changes from the main repository ? Also, what is the best way to manage my repository ? Should I create Branch for each of the sandbox above ?

Any help we be appreciated. Thanks !

You should Google and find out more about SFDX and scratch orgs as these tools were designed for "version control first" development. Each developer can create short-lived scratch orgs and your CI can do the same. But this does require your work to only have dependencies on a reasonably easy to re-create target environment. So you need to look into that first and work out how to automatically create the minimum required base environment (of both components and data). The good news is that SFDX includes lots of features to help automate that.

In the version control, yes you can create branches per feature or per release or per developer. I recommend that you keep things simple though: branches are easy to create but branch merges can become a nightmare. Favour short-lived focussed branches (a day or two) that all get merged into a simple mainline setup. Keep this illustration by Jonny LeRoy in mind when thinking about branches: 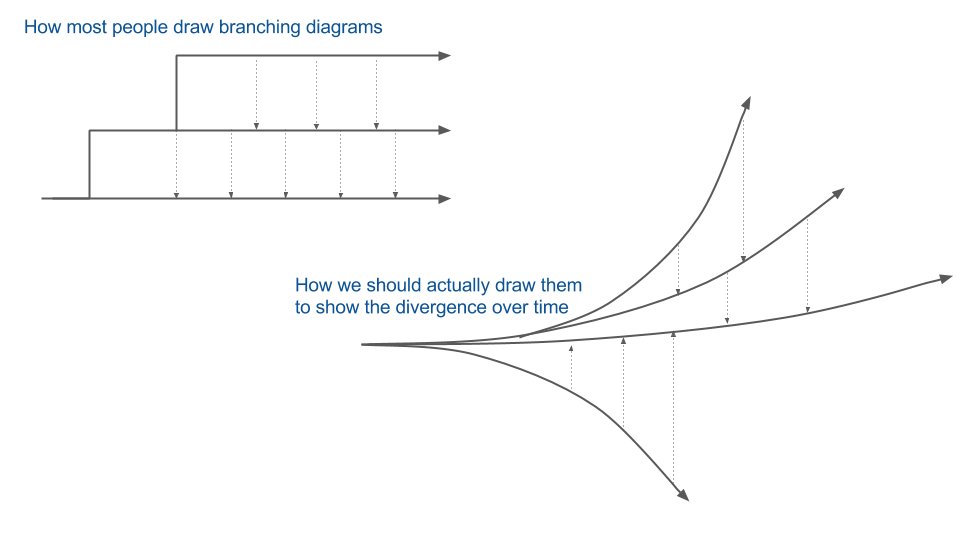 Where I work, we typically create a branch per feature, then use a pull request for the code review, then merge to the long-lived branch.

If you are using managed packages, then the upgrade path for those constrains what you can change and so is a significant constraint for what you can and cannot do as far as long-lived branches in version control. Typically you need just a mainline branch and a branch per patch version.

On Continuous Integration (CI), we did some work for Jenkins (as we were already using that) to cut down on repeated logic as we have many projects that is available here https://claimvantage.github.io/sfdx-jenkins-shared-library/.

If we were starting from scratch, we may well have picked a different CI system e.g. CumulusCI.

And FYI, we use GitHub.

As Keith C stated in his excellent answer, there are some good sources for detail on use of SFDX, leveraging scratch orgs.

My tuppence extra is that selecting git as your VCS is a great choice; many IDEs support git (including VSCode and IntelliJ IDEA, both of which can be used for Salesforce development) and you'll find many Salesforce-related resources in public git repositories.

Which git implementation you select comes down to personal/corporate choice. However, in order to support CI (e.g. on attempt to merge a PR to your master or patch branches) you need one that allows you to execute scripted processing.

Whilst Bitbucket comes with free "CPU minutes" for pipeline execution, you'll find these are used up really quickly - though YMMV - and you'll have to pay for the minutes the CI executes for (even though all the real CPU usage is on the Salesforce side, not in Bitbucket).

In terms of a branching strategy, since we develop and maintain a managed package we have patch branches as well as the master branch.

We use a branch per bug, task or user story. When the code is ready we use a PR (pull request) to get it reviewed, and then (on success) the PR is merged, triggering the CI.

NB: When necessary we back-port a bug fix to a patch branch by creating a bug-specific branch against the patch branch, cherry pick the fix commit back, create a PR and merge it. We have blocked direct commits to master and the patch branches which is why we always use a PR.

Every time we have a new branch (or when CI is executed) we also create a new scratch org. It is to the scratch org that we push all the metadata.

Developers always use the scratch orgs for any development against the bug fix, task or user story they are working on, and only that developer accesses this scratch org (except in a new specific cases). All our unit tests generate all the test data they need and we have some Apex for generating data to give something for the developer to play with.

Our CI is all about ensuring that the latest versions of the code, in master and in patch branches, have no test failures and have enough test coverage. We don't ever push our metadata directly to any orgs other than scratch orgs. The creation of the package is handled separately (though still based on the content of git). As such, developers never push anything to any sandboxes or production environments. This is something only done once we have an official package release available, and is done by the implementers rather than developers.

Although Keith and Phil answers are great, personally I want to touch your current setup.

Scratch orgs were described already. Those have one con currently (which I hope would be 'fixed' when shape orgs would be out of beta). You cannot create metdata/settings copy of your production. You need to at least once setup everything manually, turning on needed features of an org for example. Sandbox is ready to use, but still you will need to turn something on if it's not available on production. Ideally you will need to creat config file for a scratch org and data loading scripts + data to load (so you can play with it like on your full org). It takes time. But it's worth of your time.

In terms of setup of an orgs for development, testing etc. Different comapnies have different approach. I can share on of the setups I've used, basing solely on sandboxes.

CI + Branching We had

This is only an example. In your case it would be sufficient to have scratch orgs for developers, than QA sandbox for testing and then full for final tests. If you are brave you can use Full for everything. (I do not recommend it though)

Not the answer you're looking for? Browse other questions tagged developer version-control or ask your own question.

1
Should all available metadata be managed in a VCS?
29
Flows/Processes, Version Control and CI
1
version control
1
About version Control
1
What to put on stash in Salesforce?
0
What is the best practice to update <version/> in package.xml?
1
Git: no changes in this file have been detected, or it is a binary file
12
Efficiently merge handle parallel feature branches in SFDX