Property 'componentInstances' not valid in version 49.0 but Package.xml is version 48.0

Property 'componentInstances' not valid in version 49.0

I have read the following links but still have questions

I don't know the org version right now but I am using version 48.0 in my package.xml for deploying all my components and have never got a version 49.0 error.

My question is that even if I assume the new sandbox org is version 49.0. But why is it giving this error when I am using version 48.0 specifically in my package.xml ?

What is the use of mentioning version number in package.xml then if it still looks at the org version ?

The sourceApiVersion on the sfdx-project.json is what controls what API certain CLI commands use. You can change this to 48.0 and deploy if you'd like (even to an Org on 49.0 that may have changed the underlying metadata).

I was able to deploy a FlexiPage with componentInstances references to an org with 49.0 by setting the sfdx-project.json file's sourceApiVersion to 48.0.

I recommend pulling in the changes with API 49.0 after a successful deploy, however, to retrieve the metadata of the FlexiPage on API 49 to get the latest format and using that going forward.

Once all the orgs are updated to v49.0, make sure to retrieve using the v49.0 in the sfdx-project.json and deploy to update the metadata. 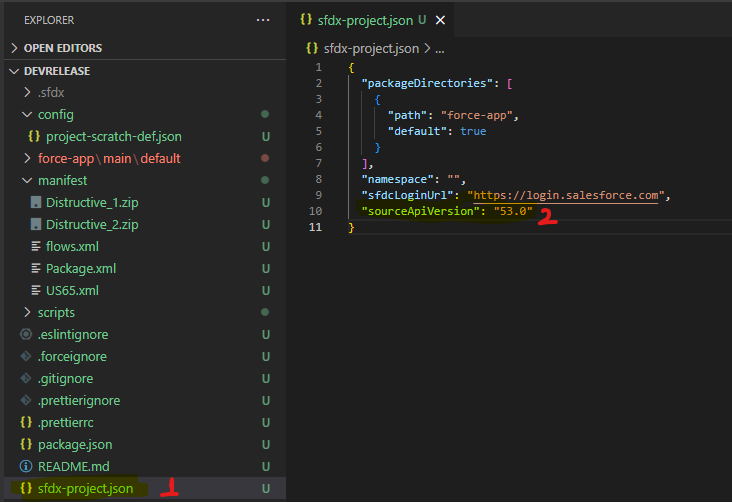 Open Sfdx-Project file and update sourceApiVersion to latest as shown in screenshot.

2
Why Salesforce thinks I'm deploying a certain sharing model, while the metadata tells another story?
9
Metadata Deploy and Push fails on Flexipage componentInstances in API 49 (Summer 20) and later
0
Error deploying flexipage to Scratch Org
2
Property 'storeOutputAutomatically' not valid in version 48.0
1
How can I change the version of a Flexipage through SFDX?
2
Property 'allowNullValues' not valid in version 54.0