On the community I have found some information about how to work around the limitation of "hard coded" data extension name in the ClaimRow function.

As reminder, when claiming a row, the rule says that: @CouponRow = ClaimRow("CouponDE","IsClaimed","ContactId",@ContactId) is the way to go. Replacing the parameter "CouponDE" by a variable is not suppose to work.

So as stated above, I found some info on how to work around this limitation. Here are the links:

Now my issue is: I'm trying to work around this limitation as well but can't manage to get this work around in place for my use case. Preview & Test keeps on telling me that the variable @CouponDE is not an existing data extension name. So not sure if the issue is with the work around itself or the way I use the TreatAsContent.

Because when I just use a function I know will not work like: @CouponRow = ClaimRow(@CouponDE,"IsClaimed","ContactId",@ContactId), the error message is different: there it clearly says that the Parameter 1 can not be a variable. Not that he can't find the data extension name.

I can see you all coming: yes, a DE with this specific name exists :-)

Here is my code, simplified at most in order to debug it (no success unfortunately, hence my post here):

So as I said this is not working for me.

Can someone help me a bit by fine tuning this code?

You'll need to split the double-percent notations in your TreatAsContent line -- otherwise, the parser will try to evaluate it. 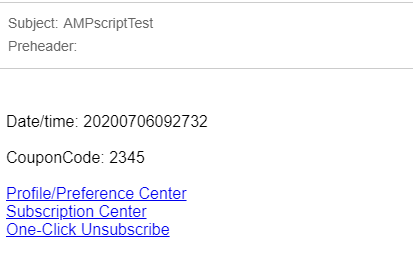 Not the answer you're looking for? Browse other questions tagged marketing-cloud ampscript or ask your own question.