How do you access the Workbench SOQL Matrix functionality?

The following came up in the Salesforce Developer podcast between Ryan Brainard (the creator of Workbench) and Josh Birk.

RYAN: [...] it’s not very well known feature. And I think it’s not enabled in the public version. And maybe even I can’t remember is the matrix cycle view. And if you’re not familiar with that, what it lets you do is when you run a SOQL query, you can also choose rows and columns that you want to display that on. And so you basically get like an X Y axis, and then it plots the records on the X Y axis, which is a really interesting way of visualizing your data. And that actually came out of the way Google Code used to display their bugs and issues. So you’d be used to be able to say like, maybe you put like the priority on the x axis, and the Maybe like the like component on the y axis. And then you can plot those you can plot your issues you can start to see like density graphs, kind of a scatterplot type thing of your of your issues. Maybe you see Oh, I have lots of you know, p one issues in the database or something like that. And I wanted to have something similar you could do with Salesforce records. So that’s where that came out of. So I think it’s something that people probably don’t use very much or know how to use. But that’s one of my one of my favorites. 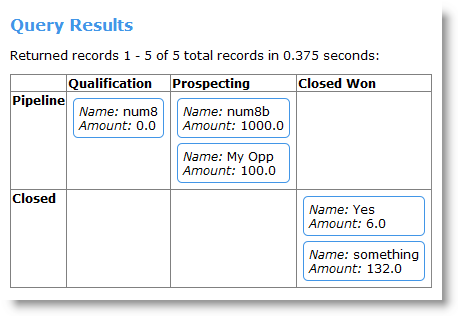 It even shows up as a view option in the workbench.developerforce.com hosted version.

However, any attempt to use it results in the following error:

"Both column and row must be specified for Matrix view."

Is it possible to make it work still?

After a bit more searching I found a similar question to mine by Jake Saul: Workbench: Matrix Grouping. That included a useful screenshot showing where the missing column and row inputs for the Matrix view used to appear (via Sushil Pandey):

From there it was easy enough to use the Chrome dev tools to take the display:none css off the two rows in question and bring it all back to life:

I tried the sample query from the prior screenshot:

The results were a bit odd. It's like it didn't correctly alias the cnt.

Not the answer you're looking for? Browse other questions tagged soql workbench or ask your own question.

5
Workbench: Bulk CSV - where do I access the data
1
Workbench & Data Loader access
0
workbench SOQL query problem
2
does workbench has access to actual data in the salesforce org
0
Is it safe to grant access to Workbench to any user?
0
How can I get information about the current user from Workbench
0
How can I make the SOQL return the "response"?
1
Error message when trying to access Workbench
1
SOQL question - can you create VIEWS (like Oracle)? and then *JOIN* them together