Are there any external call out limits in Marketing Cloud?

I would like to run an SSJS script which makes callouts to a third party system (which sends WhatsApp messages).

As this action will happen frequently I would like to know if there are any limits I need to be aware of? Call out limits, total time, payload etc.

Being a separate platform from Salesforce, Marketing Cloud —originally Exact Target— is not ruled by the same governor limits per edition and number of users as a Salesforce Org —You're probably well aware of that.

Specifically about callout limits there is no documentation. I would expect it to be somewhere in the documentation for the SSJS callout capabilities and yet there's none.

Your best shot would either be to contact support or assume there is none. The former would be the safest if you are not able to run stress tests on your journey before going live, of course :)

share|improve this answer
answered Jan 23 at 13:28

To my knowledge, the following are the limitations:

Oh and a script activity has a timeout of 30 minutes.

Note the following bullet points listed in the docs (SOAP) to stay within the provided SLA by SFMC:

There is a list of 'Yearly limits' in the documentation, but as far as I know these are not officially enforced yet.

I also found an 'Optimum Thresholds' table. Although I believe it is centered around SOAP API only, I thought it worth sharing: 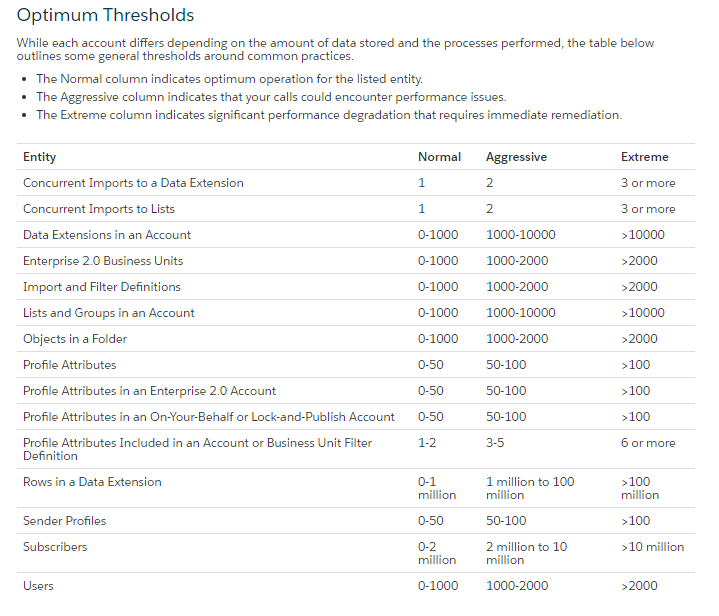 Not the answer you're looking for? Browse other questions tagged marketing-cloud ssjs http or ask your own question.

1
Using AMPscript in a Script Activity
1
How to improve this SSJS
1
Internal Cloudpages (only for SFMC Users)
5
Generating email in SFDC/Marketing cloud but sending it out to another system, not the recipient
0
Connect Individual Email Results from Marketing Cloud to Campaign in Sales Cloud
1
Always 2500 rows found in the filter
2
Unable to process HTTP return codes except 200