How to track why community changes have been undone

My team has reported several times regarding their community changes have been overwritten (Changes which are there once but disappear after a certain period of time).

Originally they though it was deployment issues. But I clearly showed to them by checking deployment status > deployment history, there is no deployment happening during that period of time.

It seems to me there is no way to track changes for community itself. So I am wondering is it possible for me to investigate the possible cause of this?

I have tried the scenario where two developers working on the same page and save at different times. But it seems to me that Salesforce handled this scenario really well. I can't find a single scenario where this should happen.

How may I investigate this one?

It's a bit hidden, but you can see this by doing the following: 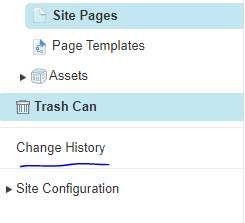 You should see a list of versions with the following columns

Not the answer you're looking for? Browse other questions tagged community deployment lightning-community versioning or ask your own question.

0
Why are no changes shown in deployment
29
Flows/Processes, Version Control and CI
34
Which kind of issues will be shown at trust.salesforce.com and which issues will be omited?
5
Deploy/retrieve lightning community page variations with metadata API?
0
Community Welcome Email Does Not Show In Activity History
4
Why a Community in Sandbox shows only “URL No Longer Exists”?
0
Why Groups inside Salesforce Org are not showing in Community?
1
Why can't I see Ideas in Community?
0
Why an error happens “Your request cannot be processed at this time. The site administrator has been alerted.”