I want to be able to query, insert and update records of a Sandbox from a Scratch org, only during the development phase. I know that scratch orgs are meant to be populated with just a little amount of data that would be used for testing or UAT, but in this case, all the data I need is located/persisted in custom objects originated from a managed package from other vendors (it means that I can't write SOQL queries for that objects because it would not even compile in my scratch org).

I prepared a diagram to help you understand what I want to accomplish: 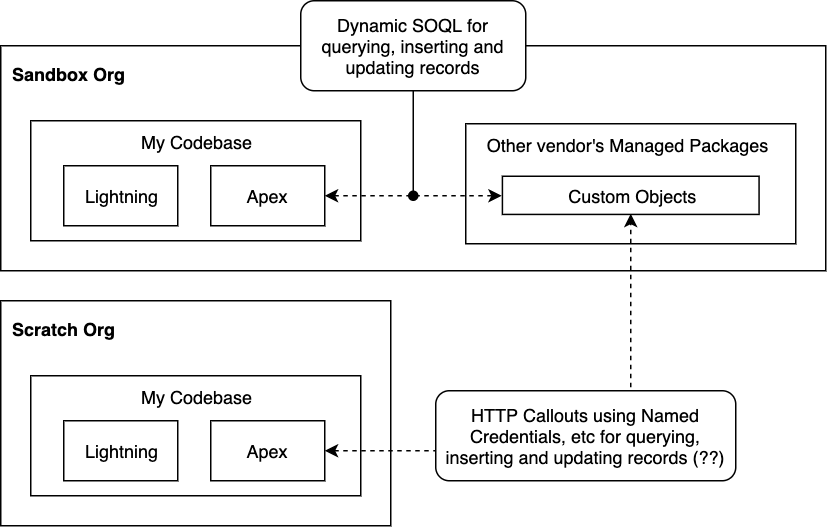 I'm almost 100% sure that I can do it all via Salesforce APIs (not sure about updating or inserting, or any other limitations). However, I would like to avoid using explicit callouts and if statements all over my code. So I came up with the very basic idea of creating a class that would encapsulate this logic. Something like:

But I'm not convinced that it is the best solution, because even without starting to implement it this way, I know that I would lose, for example, the SOQL binding support because Database.query() call will not be inside the context where the variables are.

Does anyone know how can I do it in a better way?

I think this solution is very unlikely to work. For one thing, you're going to break all of your unit test classes in a scratch org context, or else build complicated mocks or conditional logic to supply this data to your unit tests.

Instead, I'd recommend working on build automation that will seed your scratch orgs with a standardized data set sourced from your primary sandbox. CumulusCI can do this for you (disclaimer: I'm on the team that builds this free, open source product).

Alternately, if the record volume is quite low, you could create them in each new scratch org via Anonymous Apex execution.

You can install the managed package in your scratch orgs by getting its 04t Id and using sfdx force:package:install, or simply getting the namespace and version number and deploying an InstalledPackage Metadata API entity. That will result in the package being installed in the scratch org.

Not the answer you're looking for? Browse other questions tagged custom-object callout sandbox scratch-org database or ask your own question.