CI/CD with package.xml: how to deploy incrementally?

I have the following CI flows setup in my git repo:

The CI scripts use package.xml to facilitate deployments. How can I ensure that deployments to Production contain only the modified components and not everything that's been developed up until now -in a streamlined manner? The challenge I'm facing is best explained with an example:

How do you recommend I configure my CI scripts so that in Sprint 2 only the new CompC gets deployed to Staging and Production?

There's essentially a couple of steps involved to this process of doing a delta deployment.

The first is to identify the changed components. If you're working with Git and GitLab Pipelines, this is not difficult. Given a start and an end commit, it's just

to get a newline-separated list of path names that are changed. (Note: this does not include handling of deleted components. If you want to automatically handle component deletion, there'll be some additional logic involved, as those end up in a destructiveChanges.xml package).

The second step is, given that flat list of file names and your source tree, to build a Metadata API manifest (package.xml) and deployment ZIP file to push only the changed metadata components.

When I've done this in the past (with GitHub Pipelines), I used ForceCLI as the deployment engine because it makes it easy to do this step by piping in the results of the above git diff:

force push -f takes that flat list of names and synthesizes a package.xml and deployment ZIP, then deploys it to your authenticated target org.

Disclaimer: I haven't worked with this tooling in about a year.

I think the former has been fixed in ForceCLI; I don't know about the latter. I'd recommend doing some experiments.

For production deploys, it's common that you won't be deploying one commit at a time, and that your release manager will wish to specify a commit range for this deployment spanning a sprint's work. Likewise, it probably won't be fired automatically as with staging, but will be manually invoked by the release manager.

For that use case, I configured variables in GitLab Pipelines for the start and end commit (and altered the git diff commands shown above to reference those variables). They defaulted to HEAD~1 and HEAD. However, when the Pipeline for production is run manually by the release manager, they have the option to populate those commit SHAs to identify a specific range of changes to deploy: 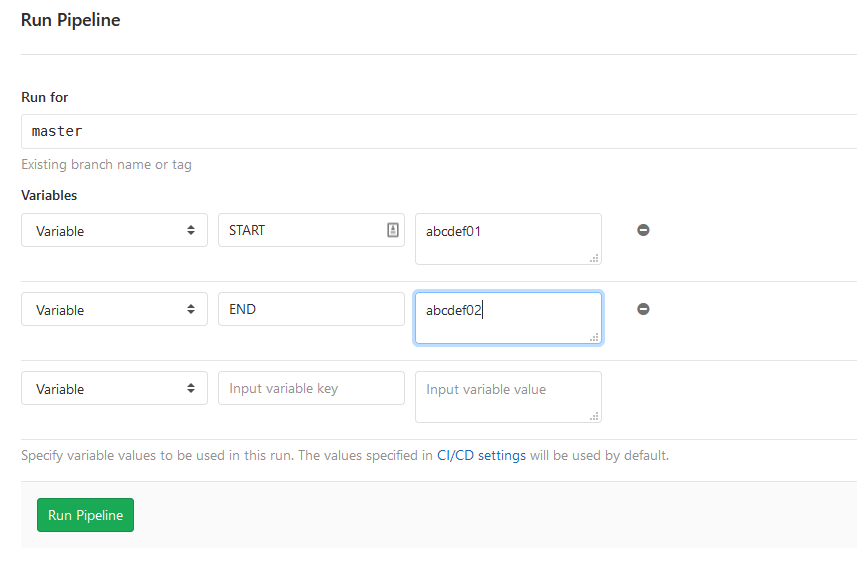 No warranty, not under active development, etc.

The CI definition is mostly boilerplate and works the same as an SFDX CI setup, with JWT authentication as described in the docs.

Note that this is only set up for manual deployments, not automated staging pushes, but that could easily be added.

It's got two manual jobs in it, so once the pipeline is created, the validate (check-only) job can be kicked off first, followed by the deploy step. This was for demonstration purposes and probably won't mirror what you'd want to do in production.

This is the shim script I used to wrap ForceCLI and run the actual deployment. The manual handling of the static resources and Lightning components may not longer be necessary based on continued development of that tool.

Not the answer you're looking for? Browse other questions tagged continuous-integration jenkins ci pipelines cicd or ask your own question.