I was trying to debug a issue for scheduleable class, I found out that it is taking approx 65,00,00,000 milliseconds which is equal to approx 180 hours. But if I open that debug logs and see execution time it is less than a second. 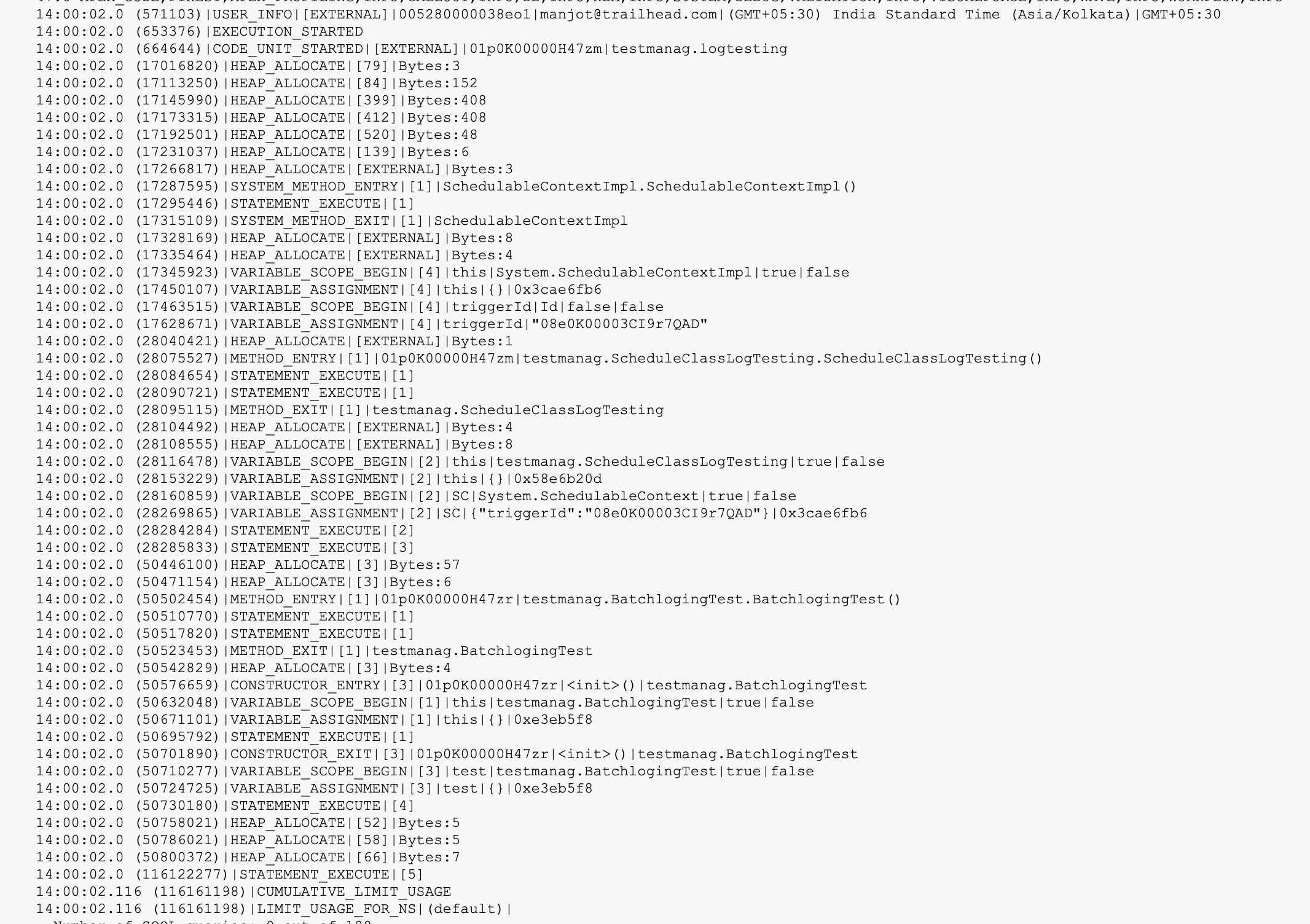 I think there is something wrong how duration is calculated for schedule jobs. Any ideas why this might be happening.

My Scheduleable class that I am testing is just a blank class so it should not take that much time.

Wrong values are only shown for schedulable jobs for all other operation debug logs are showing correct values.

This is an undocumented bug (at least as far as I can tell), but basically, it occurs in situations where the execution time is so small it causes an integer underflow, and instead returns an absurdly large value as a result. I do find it curious that you got such a "small" number, as this bug usually manifests as a duration of 2,147,483,647 milliseconds, which is equal to the binary value -1 as a signed 32 bit value.

Until/unless we get an official answer, we simply have no way of knowing the "why", all we know is that it can and does occur with very small execution times. I've ever specifically explored the limits of this, but it's likely only a problem if the time is less than a few milliseconds. By the way, I managed to get a value of 484,521,164 when I replicated your bug using nearly identical code. It seems that the bug is more random than it used to be.

This effect is completely harmless, aside from showing really large duration times in the debug logs. It doesn't mean that your code stalled for 180 hours, that you've invented time travel, or anything else. It's a simple integer underflow that you can safely ignore. I've known about this issue for years, I've just ignored it, since it doesn't have any real material effect, unless you're trying to do something with it, since logging is not always enabled, you wouldn't know or care about this under most normal circumstances.

Not the answer you're looking for? Browse other questions tagged scheduled-apex scheduled-job debug-logs or ask your own question.

7
Schedule apex class to run every minute as there can only be 5 batch jobs
4
Where do I put APEX scheduling code?
3
Scheduled Apex Job that throws errors causes all queried records to never update again in future runs
3
When is the constructor of a schedulable class invoked?
7
Deploy with Active Jobs - active job ignores deployed code on next scheduled run
2
Schedule Messaging.sendEmail()
0
Schedule a apex batch class to run every 5 min
0
Schedule apex every second week
2
Is system.schedule(…) @AuraEnabled?