I'm looking for confirmation that what I'm seeing is real, and if this is a bug or an intentional breaking change.

Yes, I know that script limits no longer apply... but...

The problem is that any existing application that uses the limits statements to decide if it is safe to run (to avoid exceeding limits) will fail - as it thinks it has already exceeded limits.

Worse - this change impacts code that is running on older version APIs.

Josh Kaplan just tweeted a blog post explaining that this functionality is changing, and explains the issue quite well.

Essentially, Salesforce is going to change the return value of Limits.getScriptStatements() to be % of CPU limits used * script statement limit, as a way to continue to control flow, while giving a rough estimate of overall limits, leveraging the new CPU Limits.

Please keep in mind that this number is not what it says it is. It is NOT the number of statements. It is a representation of what the statement count might have been, relative to your limit. It will, in nearly every situation, undercount the number of statements done. The intention with this mimicry is to allow your code to probably do what it used to do without an immediate failure.

Salesforce have issued via the Partner Portal an update (shown below), it talks about the method being depreciated but does not really be all that clear on the change in behaviour (though the Apex docs do elaborate). A better approach would be to make it platform API version driven i also agree.

Though i can imagine that internally retaining the statement calculation is proving difficult (and ironcailly consuming CPU itself perhaps?). That said it's clearly having an impact for those that have been using it to implement code path decisions (e.g. batch vs interactive) or better end user facing messages.

Salesforce Recommendation The recommendation from Salesforce (in the docs below) is to move to using the new CPU limit methods, however these are non deterministic so be aware of this. Personally my advice is if your looking to manage limits and split code paths accordingly, try to calibrate the decision around something that is end user facing and deterministic, such as the type of filter they enter, the number of rows or a custom setting to allow for calibration in the subscriber org.

Tests that Test Governor Limit Variance. I will miss being able to assert on a level of tolerance in the statement limit consumption being breached in test scenario, i'm not convinced using CPU limit in this case will be stable enough, so for these tests designed to "test" the codes consumption of platform resources it looks like another solution needs to be found in respect to CPU time at least.

Hopefully Saleforce will take a look at this feedback and give further thought to this change and how to give some facility to allow developers more time to phase it out of their code... 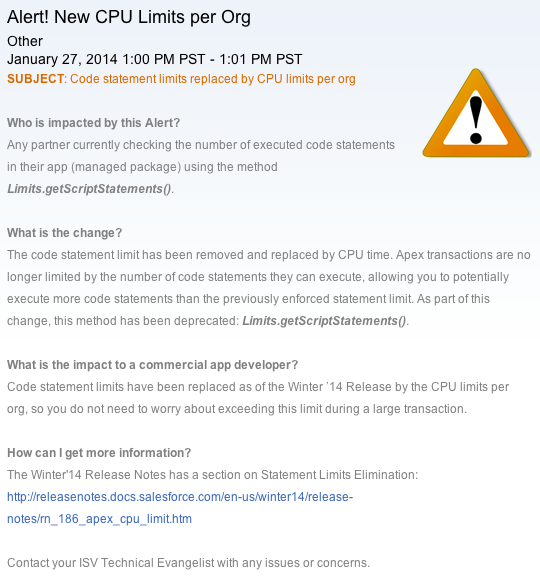 The link shown in the image is here. 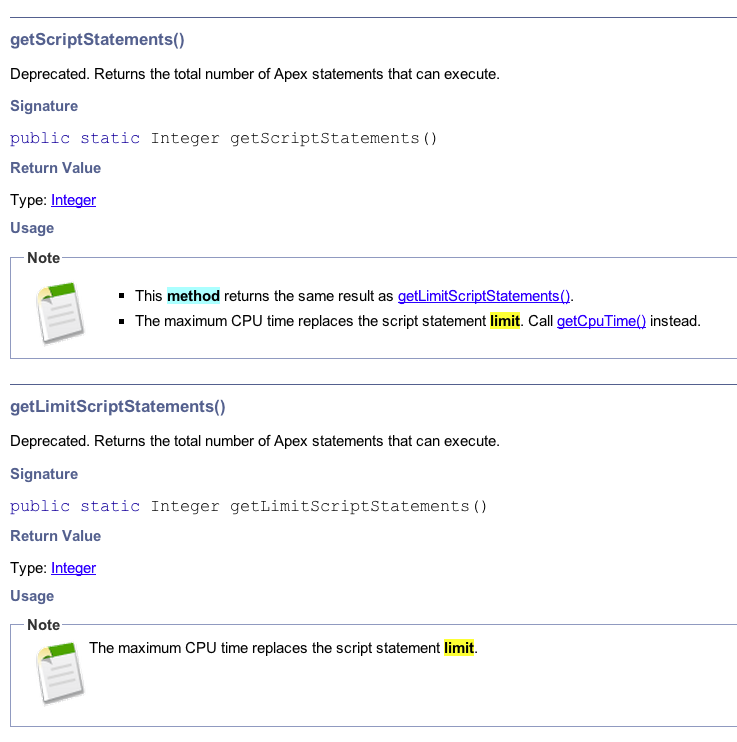 My two sandboxes that were upgraded to Spring '14 over the weekend are returning 200000 when executing:

My Winter '14 sandbox and my Winter '14 Production Org are returning '1' when executing the above statement.

The code I maintain throws exceptions in several spots if Limits.getScriptStatements() goes above 190000. As you may have guessed, I'm getting exceptions thrown throughout the code. Thanks to my coworker for finding this in her newly updated sandbox. Otherwise, we probably wouldn't have caught it as strangely my Sandbox isn't due to be updated to Spring '14 until after our Prod instance.

Not the answer you're looking for? Browse other questions tagged limits spring14 or ask your own question.

2
How can I get a list of existing cross-object references without hitting the limit?
4
How can I limit REST API response to less than 2000 records?