LWC: CSS animations from different components colliding with each other

I just noticed that two of my Lightning Web Components' animations are colliding with each other.

JS: showModal is false by default so this component is not displayed. Listens for an event and sets the showModal correspondingly.

JS: Sets the value of the my-image variable.

I find it bizarre that the animations collide even though:

I thought I had found a solution to this but I guess not.

Has anybody else experienced such a problem and what would the explanation for this be?

I separated this into a simple HTML file and noticed that the animations do not collide.

So then as a next step, following sfdxfox'es suggestion, I moved my 2 components to a playground and everything was working alright.

Then I went back to my LWC project, which btw is inside a community portal, and I noticed that the names for the animations are being overwritten! So for example if my css property was animation-name: changeWidth; that would change to animation-name: a; by the time it would load in the browser's inspector.

So then I looked at the animation names, in the inspector, for the other component(which has a bunch) and noticed that they were also overwritten following the same pattern a,b,c.

I also noticed that the @keyframes from component #1's animation somehow transferred into component #2 animation. I imagine that's related to both components having the same animation name of a. But even if that's the case I thought this shouldn't be a problem because of the different shadow DOMs?

Here's a preview of what component #2 animation looks like in the inspector: 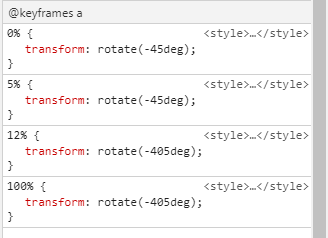 EDIT 2 I have now put a simplified example on this link: https://developer.salesforce.com/docs/component-library/tools/playground/d103Sw2J/2/edit

What you can witness is that animations with the same name are colliding with each other even though they are in separate components.

However if you are to try this in a Lightning Web Component the animations don't even need to have the same name and they will still be overwritten.

TLDR I noticed that the CSS animation names for classes are being overwritten by Salesforce with single letters in alphabetical order starting with the letter a. This would somehow collide between different components that would inevitably have the same animation names since all begin at a. This leads to keyframes from one component being assigned to a completely different component.

I opened a ticket with Salesforce and I got a response from their R&D team.

It seems like Salesforce are using CSS Loader to gather all of the css files and combine them into a string.

The bug I've witnessed is coming from there, not Salesforce per se. For that reason it doesn't appear that Salesforce will be addressing this. Instead they linked me to an article and a github discussion.

What I ended up doing(at first before contacting salesforce) is keep all of my animations in the same component so they don't overwrite each other. The downside to that is that things can get out of hand if you use CSS animations heavily.

Based on the article that Salesforce linked me I will instead Just copy the keyframe rules into each component’s CSS and live with minor redundancy. Again this redundancy depends on how many css animations you are using and can get out of hand. However at least that will allow you to get over some complications of storing complex animations in a single component. The key here will be to ensure that your keyframes are in the same order every time or else you might get the wrong animation assigned to your component.

Not the answer you're looking for? Browse other questions tagged lightning-web-components css animations or ask your own question.

2
Loading dynamic images as background, how can I check for image first?
12
Refer static resource in css of lightning component
0
SF1 appHostable Action Menu Style
31
Target inner elements of standard Lightning Web Components with CSS
1
LWC: Interacting with the chat widget in a standard portal template
3
applying styles to several html templates with single css file
4
LWC lightning-card border not shown with slds-card_boundary
2
Inconsistencies between shadow dom and synthetic dom on LWC OSS
0
Affix a Div while scrolling
0
Lightning web component - how to get width of an element in javascript