I am trying to come up with an optimal solution for below use case.

I have an org structure like this and There are VPs for each department and A department should not see each others records.

The real challenge is a Director can work for multiple VPs. I know we can't assign a user to multiple roles. This is what I have come up with.

Would appreciate any help and any other thoughts?

Here's one approach that I think will work for your situation. It may not be entirely optimal performance-wise (it creates multiple sharing paths for some users). In the context of your real role hierarchy, you could do some further analysis and optimization.

Suppose we have three organizations, Sales, Support, and Marketing. Each has a VP with their own Role (VP-Sales, VP-Support, and VP-Marketing). There are analogous Director and Manager Roles under each in the hierarchy (Director-Sales, Manager-Sales, and so on).

We create Public Groups "Sales and Marketing Leadership" and "Sales and Support Leadership". Each group contains the two VPs in question. Then, we create one additional Group per leadership grouping, containing all of the Roles subordinate to the directors in each grouping. So we'd have "Sales and Marketing Roles", for example, containing the roles Director-Sales, Director-Marketing, Manager-Sales, and Manager-Marketing, and so on. 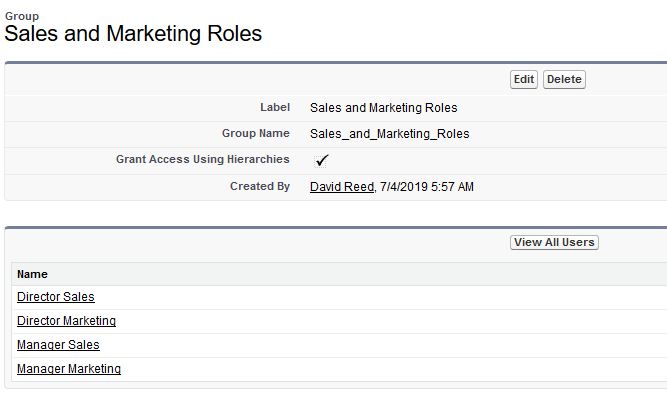 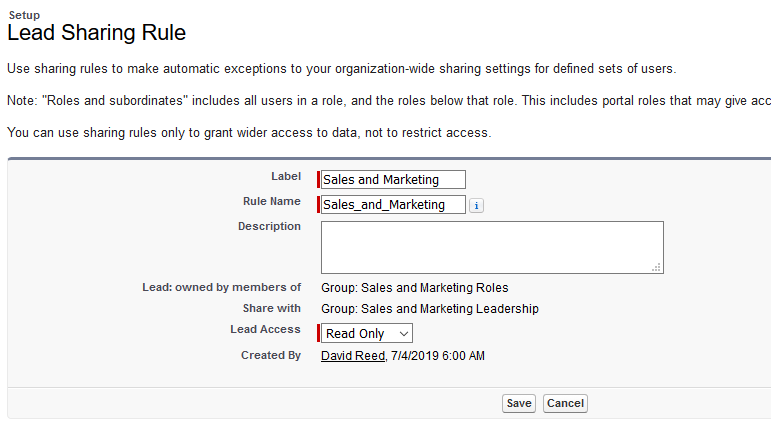 I tried this structure out (to the extent possible in a two-user scratch org) and I think it hit the mark you're trying for.

An alternate and simpler solution, if it's applicable to your situation, would be to give the VPs View All permissions and narrow them via Reports that are filtered on other record values. For example, if VP of Sales can get what she needs from a Report or Dashboard filtered by Opportunity Record Type and doesn't need to worry about record visibility, that's an easy solution.

Not the answer you're looking for? Browse other questions tagged apex sharing or ask your own question.

2
One general sharing rule for a user with a role to share Contacts with their Managers
1
Sharing records with roles based on recordtype and field value
13
Role-based sharing rules for partner community users
1
Use Case: Sharing For Record Visibility (no Roles)
3
Community Sharing and Visibility
1
Record sharing model
0
Contact sharing is not working only for a specific Account record type
0
Sharing Cases owned by “High Volume Customer Portal User” with Account Owner?