A message from our CEO about the future of Stack Overflow and Stack Exchange. Read now.

What's the most efficient way to create a permission set for a Salesforce App?

I built a new Salesforce application in my Enterprise Org's (Developer Pro) sandbox just to get a minimal viable project up and running quickly and demo this to some users. There's a bunch of custom objects, a couple of Apex triggers, a handful of Apex classes and an inbound REST endpoint and some other odds and sods.

Obviously at some point I needed to extract this app and get it under source control in a Salesforce project and begin using SFDX. So I followed the steps as described in:

This all went swimmingly well and I am able to push the app to a scratch org just fine.

After opening the app in my scratch org it seems I need to create a permission set so I can access my app, see its tabs and add/update records. It seems that app permission sets aren't included in the metadata retrieved using sfdx force:mdapi:retrieve.

To overcome this I followed the steps in section 11 of Migrating Existing Projects to Salesforce DX which is fine. Then I got to the "Object Settings" permissions bit as seen here (I've greyed out some stuff that's sensitive): 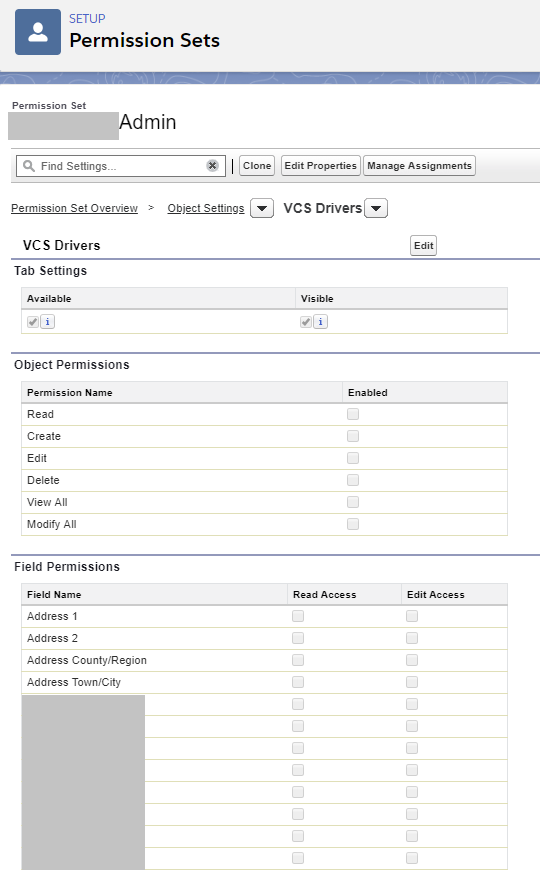 Each one of my custom objects has between 30-40 fields, do I really need to tick every "Read Access" and "Edit Access" checkbox individually?

Is there a better and more efficient way to do this?

Browse other questions tagged salesforcedx permission-sets app or ask your own question.

6
Unable to convert MDAPI Project -> SFDX
4
SFDX PersonAccount: ERROR: Entity of type 'RecordType' named 'Account.Business_Account' cannot be found
4
SFDX ERROR: You do not have access to the [ScratchOrgInfo] object
1
Unable to authenticate through REST API when using scratch org
0
vscode/sfdx doesn't see my project
0
What are the correct steps to create Scratch Orgs with custom objects
0
Not able to get objects,classes and visual fore pages into scratch org