They start from a clean packaging org and a clean Git master. Every developer creates a feature branch for her user story and works on it.

I'm going to have to answer the questions out of order for them to make sense, and much of this is anecdotal at this point, but we've been doing this for a couple of years now, so I hope that this answer will be useful.

Is the recommended approach documented anywhere?

There are several competing theories on which way is the "best," and it's not related just to Salesforce, but any team that deals with git or another version control system. Salesforce only recommends that we use git, but doesn't prescribe a specific pattern, as far as I'm aware.

Should everybody pull and recreate and merge as soon as one story is done and merged?

Depending on the cadence of the team, this is more likely to be disruptive than helpful. There's a fairly simple way to handle this situation, which I'll outline below.

When do they recreate their scratch orgs?

Whenever they feel like it. You can do this one per story, once per feature, every time it expires, etc. Assuming all of the code is in your source of truth, it shouldn't matter.

When do they commit and push?

Commit periodically to have "backups" in case things go wrong, and push (preferably with a "squash") when it's ready to move on to the next branch.

When do they pull?

Immediately before branching or merging.

How would that look?

After a lot of painful experiences, we've come up with this process in general. Starting from the point where there's a new story to be implemented...

The repo should be organized with a master branch, a staging and/or test branch (for deployment to a master testing sandbox), and one branch per story or feature. Start by going to the "dev" branch, whatever that means for your org, pull to make sure you have the latest copy, then create a new branch to work in.

Developers then push the current state of affairs to a Scratch Org, and begin development using their preferred method. Periodically commit so you can fix mistakes if they happen or if your org expires, etc.

Resolve any conflicts, commit again, and then merge/pull request back in to the dev branch. At this point, the dev branch should be good for testing and deployment. Finally, when deploying to production, a similar pull, merge, resolve conflicts (which ideally should not happen), and merge again cycle should happen.

Once everything is fully merged to production, you can delete the story branches to save space and optimize performance.

There are numerous strategies for doing so (So, there is no 1 good answer), however, here are a few resources that can help answers some if not all those questions based on your needs:

These examples are using the default configuration with GitVersion. Which is continuous deployment mode for develop and continuous delivery mode for all other branches. 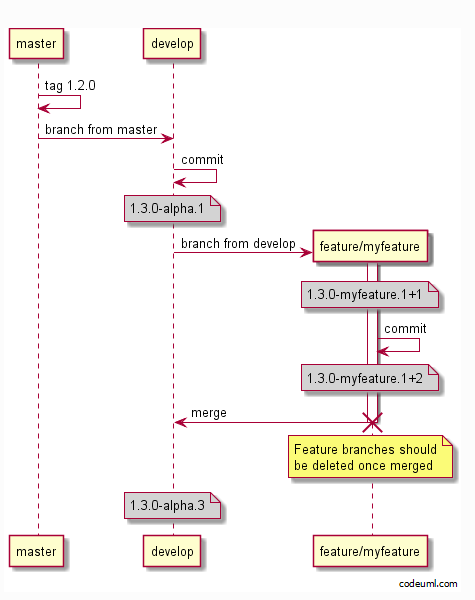 The main rule of GitHub Flow is that master should always be deployable. GitHub Flow allows and encourages continuous delivery.

For a more verbose description of each step, you can refer to Understanding the GitHub flow

Once is done, rebase your branch to get the newest version of master, then:

(Currently we have 35 packages)

Not the answer you're looking for? Browse other questions tagged salesforcedx versioning version-control ci feature-management or ask your own question.

6
SFDX Development Process - Managed Package and VCS
2
Ignore files when force:source:convert
2
Step-by-step guide to migrate existing managed package to DX
2
Release Management in Salesforce
7
SFDX: Use Scratch Org without PROD Org Access. Possible?
2
Working with GIT and org code in VS code for a single sandbox
4
Git workflow on teams with point and click admins
4
How to best cope with unpackageable metadata (TopicsForObjects) in SFDX