I have a lightning web component, using lighting-datatable with row-numbers visible. This works well up to 99 records... then I get this:

Is the row numbering limited, am I doing something wrong, or is this a bug? Any workarounds? 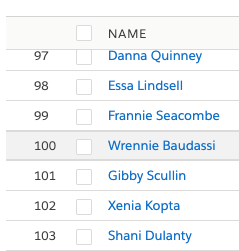 BTW, there's a lot more info in the dev guide here that isn't detailed in the reference materials. In particular, how to handle draftValues, which is necessary to get the Cancel/Save buttons to disappear after an inline edit.

Not the answer you're looking for? Browse other questions tagged lightning-web-components lightning-datatable or ask your own question.