I did a 'Run All' for my tests from Sandbox Developer Console.

Under the tests tab, there is a column named Total. For my all tests it is shown as 8. In my org I have around 200 test methods which are spanned more than 8 files. My question is, is that number meaningful? Am I missing something in here?

Note that, for classes, I can see that it is the number of test methods that class has. I am asking for the number at the top.

If you go deep into the minified Developer Console source the answers are hiding there.

As best I can tell, the "total" column is populated in the processTestResults function that is defined in /jslibrary/1539646802000/sfdc/ApexIDEPanels_Ext4.js. This is for loading the results into the testResultTree. The node we are interested in is the root node, which in my formatted source is c. 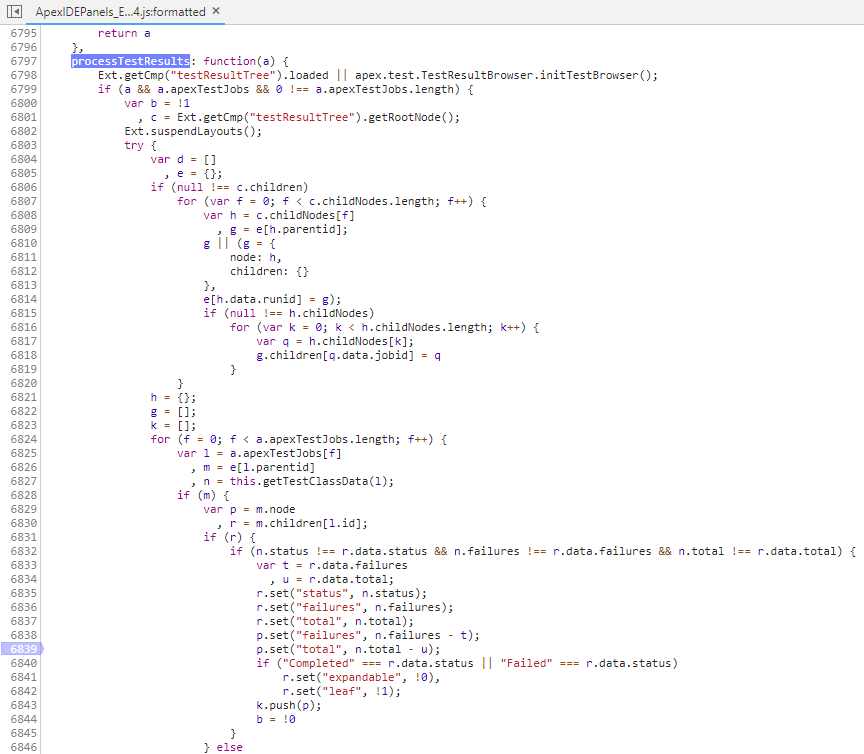 Most of the child nodes get their Total from the extstatus returned by /_ui/common/apex/test/ApexTestQueueServlet?action=STATUS

I've found that if I close and then reopen the Developer Console after the tests have run it will update to the correct total, which should be the total number of test methods run.

Not the answer you're looking for? Browse other questions tagged unit-test sandbox developer-console or ask your own question.

9
1.how to stop run all tests? 2.validation running for about 6 hours in production. how to stop it?
18
WebServiceMock causing “CalloutException: You have uncommitted work pending” when creating managed package
21
Developer Console Winter 14 anomalies
14
What qualifies as running a test synchronously?
1
Unit Tests max number of test methods in a class?
1
Apex tests stalling, nothing will run
2
Developer Console - Testing Issue
3
Code Coverage reports 0% when 100% of the class is covered with tests