Performance comparison - repeat loop vs more in one loop

I'm trying to optimize some code and am going through some triggers. I'm wondering if there is a performance difference between

In general less loops is better, as this can lead to better chances to not thrash the L2 cache on the CPU, however there are so many levels between there and your apex code that the odds of you actually seeing any measurable difference is nil.

For triggers, performance is totally dominated by db access by a large margin, so that's the best place to concentrate on perf (make as few db calls as possible, access as little db data as possible, things that the governor limits already incentives you to do).

For apex code that's not touching the db,and doing approx the same number of script statements, don't sweat it, pick the version that's the most understandable/maintainable.

I have written a test class, you can try this in your own org: 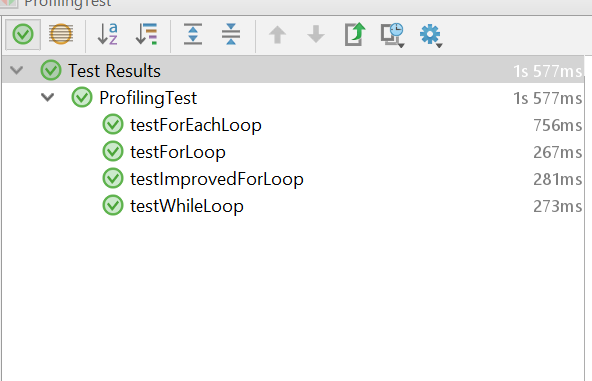 This clearly shows that if we use testForLoop, testImprovedForLoop or testWhileLoop, these are 80% much more efficient than testForEachLoop. I think the reason behind this might be that the iteration loop keeps on decreasing when we use one of the three loops defined above. Also as list is an array and the 'i' parameter knows which bucket it need to pick the value from.

This link also may help in performance improvement : https://welkinsuite.com/blog/how-to-get-past-apex-cpu-limits/

Not the answer you're looking for? Browse other questions tagged apex trigger soql performance loop or ask your own question.

38
Similar queries: Better to query twice or process via Apex?
3
For loop within for loop
2
Too many SOQL queries - wanting to store in a map and check
3
See Number of Queries Executed in Call-chain
1
Apex Loop break and continue
6
Can single Trigger by object cause performance issues?
3
SOQL for loop returning a list or list
2
How to Optimize a Nested For Loop and Avoid CPU Limit Errors
11
Comparing Apex Loops and why Iterators are dramatically slower than for loops?
6
FFLib Selectors with SOQL For Loops