I'm using Open Id for Salesforce, I followed the Doc from https://help.salesforce.com/articleView?id=sso_provider_azure.htm and could able to login to Salesforce using Azure AD credentials successfully. Now, when I'm trying to get access token with Auth.AuthToken.getAccessToken(ProviderId, 'Open ID Connect') it returns null. So I started writing an apex code and a Visualforce page as below to get the authentication Code from Azure AD and then to get an Access Token using Azure AD OAuth 2.0 code grant flow.

Now, I'm getting the below error. Can anyone please help me, how to get the Oauth State in Salesforce. 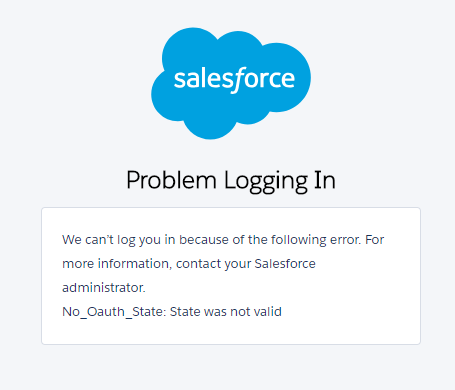 The reason you're seeing this error is because of the way you're implemented the use of the OAuth State attribute in your Controller (it doesn't belong there as part of string that's a constant).

From the OAuth Documentation:

RECOMMENDED. An opaque value used by the client to maintain state between the request and callback. The authorization server includes this value when redirecting the user-agent back to the client. The parameter SHOULD be used for preventing cross-site request forgery as described in Section 10.12.

10.12. Cross-Site Request Forgery Cross-site request forgery (CSRF) is an exploit in which an attacker causes the user-agent of a victim end-user to follow a malicious URI (e.g., provided to the user-agent as a misleading link, image, or redirection) to a trusting server (usually established via the presence of a valid session cookie).

A CSRF attack against the client’s redirection URI allows an attacker to inject its own authorization code or access token, which can result in the client using an access token associated with the attacker’s protected resources rather than the victim’s (e.g., save the victim’s bank account information to a protected resource controlled by the attacker).

The client MUST implement CSRF protection for its redirection URI. This is typically accomplished by requiring any request sent to the redirection URI endpoint to include a value that binds the request to the user-agent’s authenticated state (e.g., a hash of the session cookie used to authenticate the user-agent). The client SHOULD utilize the "state" request parameter to deliver this value to the authorization server when making an authorization request.

As you can see, this is about verifying the redirection that's done is legit to prevent CSRF. The method you're utilizing doesn't do that which is why you're receiving the error message you are from Salesforce.

Not the answer you're looking for? Browse other questions tagged apex oauth2 single-sign-on open-id-connect azure or ask your own question.

2
Send chatter files with REST
0
Apex Prepopulated Email body
2
view state does not save state
4
How do I authorize access to a managed application in another org?
1
Why Am I getting invalid_client_credentials with Web Server OAuth Flow?
3
How does Salesforce handle or use the state parameter on an oauth callback?
0
Error while logging into salesforce using Google Oauth
0
Salesforce Marketing Cloud SSO setting with OpenID Connect