How to use Loop and Assign in Flows to clone permission sets?

I have been working on a project to clone an existing user to create a new user. I need to be able to pull all the information from the existing user's record, including permission sets. I have a basic flow created that functions like this: 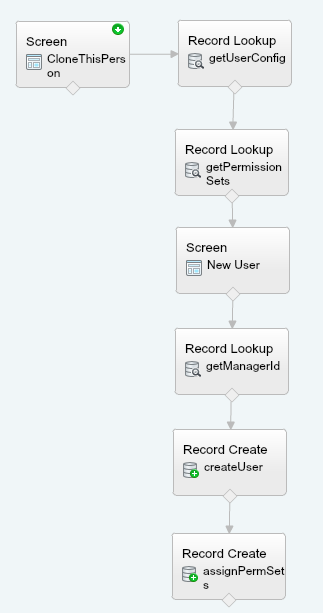 I am extremely inexperienced with flows and I am trying to learn as I go, but I am pretty sure that I am NOT going about this the right way. The flow is working, in terms of finding the user to mirror, and is pulling some info like role/profile and creates a new user, but it is not pulling all of the information needed. The most pressing questions I have now are:

I am sure this can be done with a flow, and it will be faster to learn a flow than trying to create test classes.

I believe you are trying to Lookup the PermissionSet object when you really need the PermissionSetAssignment object. (because User to Permission Set is a Many-to-Many relationship, it needs a Join object between them)

After lookup the original User, then Fast Lookup the PermissionSetAssignment object with the criteria:

(Fast Lookup returns a collection rather than a single record. But it's not fast)

Not the answer you're looking for? Browse other questions tagged visual-workflow loop or ask your own question.

3
Visual Workflow: Cannot get choices to display properly
0
Flows - Fast Lookup and Decision - Only Proceed If Record(s) Found
0
Choose newly created record in dynamic choice in Flows? And filter by related records attached to master record
1
Can a flow produce an error message like a validation rule?
0
Unable to get record Name, only get recordId to display in Flow Builder
0
Fast Create in Flow Doesn't Find Any Records