Is that possible to enqueue more than one action? Please suggest

I just read the best practices article for the Lightning and I am wondering is that possible to have more than one enqueueaction in client controller js? Please suggest. There is some hint given in best practices (highlighted) that composite request is possible. Please provide some code snippet of how it can be achieved. Thanks. 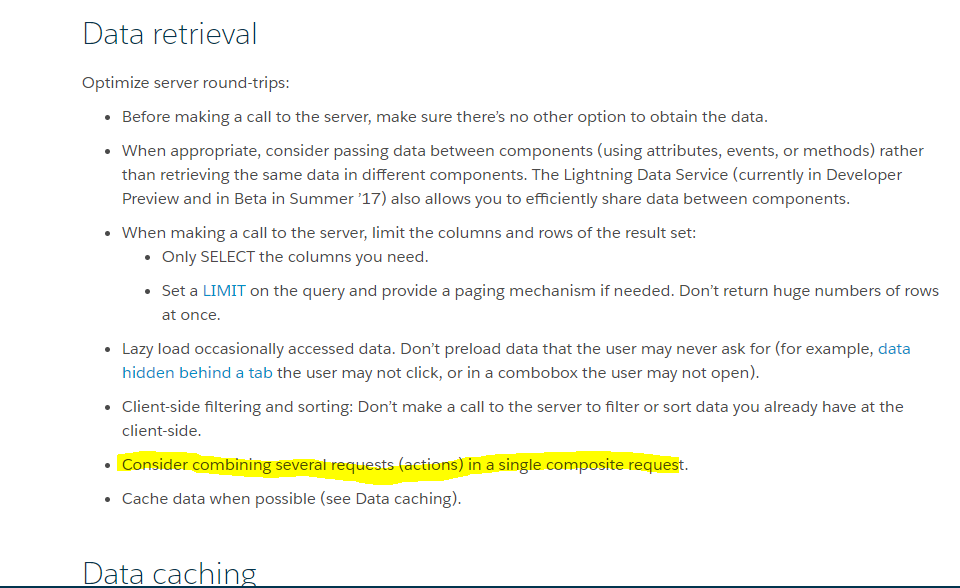 There's two basic mechanisms for composite requests. For completely unrelated requests, simply call $A.enqueueAction for each action you'd like to queue; they'll get handled a few at a time (as explained in Lightning's "Boxcarred Action" and Its Behavior).

When you have a scenario where you call the server, get data back, then call the server again, etc, consider if it's possible to write a wrapper object and return all the data at once (hint: you usually can). The fewer times you need to hit the server, the better off you'll be.

In this example, instead of just describing picklist values, then calling a separate response to get the Lead record, we combined them into a single composite, which is slightly more efficient.

Not the answer you're looking for? Browse other questions tagged lightning bestpractice performance or ask your own question.

2
Simple Lightning Component Help with passing values to Custom Object
3
Is there performance degradation when using Lightning components within an aura:iteration tag?
14
Lightning Components: Why is the rendering of 3-level nested <aura:iteration>'s so slow?
7
Lightning - Combobox vs Select
7
Practical Use of Lightning Data Service
1
Set more than one path to an sObject
11
Why is my Lightning App inside a Managed Package extremly slow during its bootstrap phase (but not in the DEV org)?
1
Read more than one attribute from select list
14
Lightning Framework vs Standard Client Side Frameworks (i.e. React) // Which to chose when, and why?