How to retrieve FieldSets and their fields of an object via the API?

I work on a .NET program retrieving some metadata of a given Salesforce org via the API.

I have already managed to retrieve a list of all standard and custom objects in my salesforce org via the REST API, so I know the names and labels of the objects and I also have a list of all the fields an object contains.

However, I could not find any way to retrieve the names of the FieldSets of an object and—more importantly—the fields that are contained in the FieldSets without having to implement another APEX class on the Salesforce org itself, as suggested in this answer.

How do I retrieve the FieldSets and their Fields of any object via the Salesforce API? I would prefer to do it via REST, but a solution via SOAP is fine if the former is not possible. More important to me is that there is minimum change done on the salesforce org itself, so that the program will "just work" with any org (setting up OAuth is fine, though).

As @battery-cord commented, you can start with a SOQL query against the Tooling API. Demonstrated here using the Developer Console, which uses the REST version of the Tooling API to run the query (Note the checked "Use Tooling API" option). You will want to filter on the EntityDefinitionId. 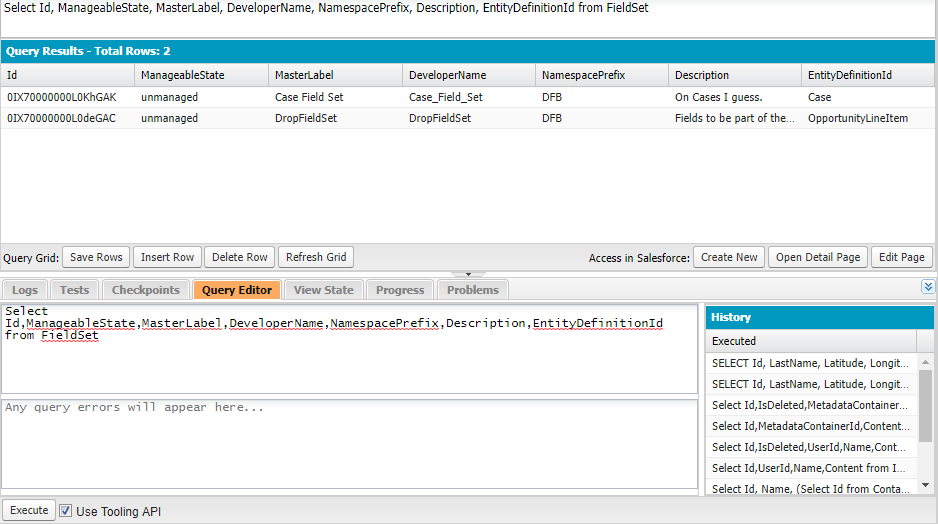 That will find you the FieldSet, but doesn't go so far as to enumerate the FieldSetItems. These are accessible via the Metadata API (again as noted by @battery-cord).

That's easily said, but required some perseverance to get going. It turns out all the work is getting the valid name to pass into readMetadata.

I'd initially thought I could pull the names directly from the following. However, the FileProperties.fullName didn't include the namespace of my dev org. As a result, I got an empty Metadata record back.

As another approach, you might look at how SFDX handles and deploys FieldSets. Is is listed as a supported component type.

Not the answer you're looking for? Browse other questions tagged rest-api soap-api c# .net fieldsets or ask your own question.

4
Is it possible to get an objects fieldsets with the REST API?

0
Retrieve Contact photo imported from Linkedin via REST API
2
How to add a RemedyForce incident via the Rest API?
1
Retrieving email by id and but throwing an error
4
Internationalisation for Force.com Mobile SDK apps
0
How to retrieve Solutions attached to a case via the REST API
1
Syncing a Custom Object with Foreign Key relationship via REST-API and .NET-Force-Client
0
Do users need ModifyAllData to retrieve object and field data using the SOAP API?
0
Unable to retrieve Marketing Cloud/ExactTarget SOAP Api SubscriberSendResult Object
1
Retrieve the Salesforce Org-wide API Consumption Percentage?