I have played with the State & Country picklist value UI for adding them, and it works OK for small amounts, but it is not meant for batches. I have 760 additional states I need to add for various countries, and the UI takes about 30 seconds per state you add. I've been trying to edit the Address.settings XML file that you can pull down via Eclipse, and am finding that while I can edit new (custom) states I've manually added via the UI, I cannot add new states for whatever reason.

Each time it complains about the ISO Code, which to be fair probably aren't real ISO codes, but it is what the client wants to match their existing system. (Values are 1-2 digit numbers or 1-3 character letters).

As I mentioned, if I added this to the UI and went in to change one of the associated pieces of metadata (say the tag), it works fine.

Here is an example of what I tried, based on how the states come back if you look at custom ones you add in the UI and how they show up in the XML.

UPDATE: Looks like I overlooked the note in the API docs about the Metadata API not supporting creates/deletes yet. http://www.salesforce.com/us/developer/docs/api_meta/Content/meta_addresssettings.htm

As of this time, there is no support for doing anything but mass editing of States you've already added manually to the system (no way to use the Metadata API to create/delete).

The best way I've found to do this is using the Selenium plugin for Firefox. It's a horrible hack, but it got the job done and has saved many hours typing thousands of values into multiple environments. You can generate a file by recording your actions in the browser, and then replay that file against a Salesforce session to insert the picklist values.

The recorded file is in HTML format, so you can use a text editor to generate it automatically. I loaded the state list I needed to import into Excel, and then generated the HTML I needed to import it into the org using excel concatenation functions.

Below is an example of the HTML I used, to import more simply insert repeated copies of the whole section within the <tbody> tag

Beware, this solution is liable to break at any moment if Salesforce update the configuration UI. Also the reliability of the import varies with your network connection, and the speed you execute the script in Selenium (although someone with more detailed knowledge of Selenium may be able to fix this).

Here's a batch class that creates all ISO states: 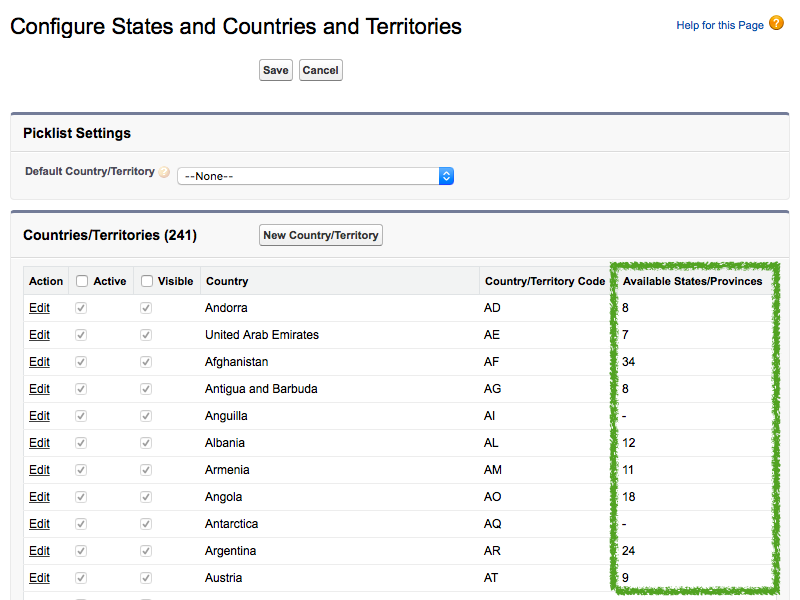 Not the answer you're looking for? Browse other questions tagged migration-tool eclipse xml or ask your own question.

9
How to write Address.settings in order to implement Country Picklists via Metadata API (eclipse)?
1
How to get the list of values from the Soap Response?
0
How can I populate two columns per row from a RSS feed
2
How To Deploy UserTerritory2Association.RoleInTerritory2 Picklist Values
0
List<string> how much values/Size can it store?