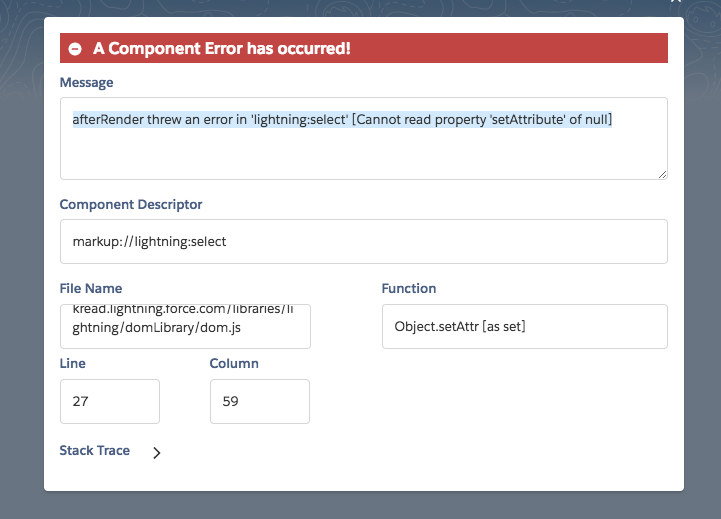 Bizarrely the error shown below only happens intermittently, 1 in every 2 or 3 times it will show. Or it will show repeatedly for 5-6 times then not again for 3-4 loads of the component.

I've determined that whenever the error appears the logs show that the afterRender function is called more than once per child component.

Salesforce's documentation states that afterRender is only called once in the lifecycle but it is definitely being called multiple times here as I created a custom renderer on the child component to analyse the issue.

When the component loads without error then the logs show one afterRender call per child component, as expected.

I have reviewed the code on the parent component and the functions being used to dynamically create the child components are only being called once.

How can I either determine why the afterRender is being called multiple times and prevent it OR ensure that the property it is trying to work with is not null.

I determined the issue was happening not on the creation of the components using $A.createComponents but when adding the created components to the body (Aura.Component[]) of the parent.

To resolve it I did the following:

I can confirm that suggested solution works. In my case, I wasn't assigning to v.body but an attribute which I was using in the body of the component itself.

I have simplified this by simply returning the new instance of the component via the resolve function and setting it to the desired attribute in the then callback.

Not the answer you're looking for? Browse other questions tagged lightning-aura-components rendering or ask your own question.